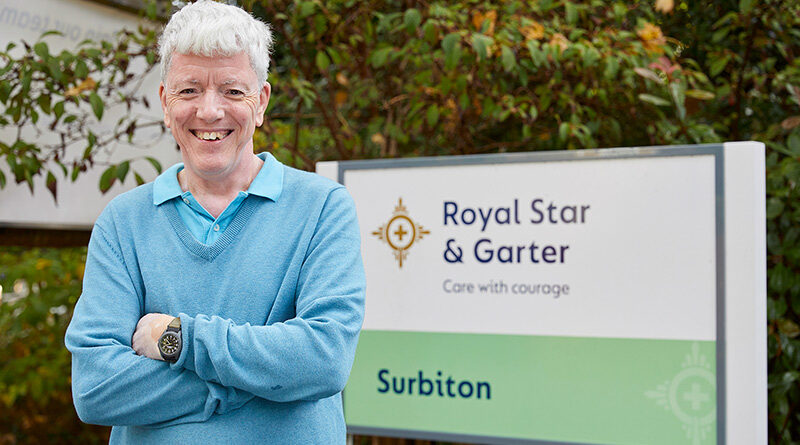 A carer has celebrated 40 years with Royal Star & Garter.

Emrys Owen is the longest serving member of staff with the charity, and was one of four people honoured at the Surbiton care home on Thursday 20 October.

Royal Star & Garter is a charity which provides loving, compassionate care to veterans and their partners living with disability or dementia, and also has Homes in Solihull and High Wycombe.

Other staff members recognised at the long-service ceremony were Nurses Charlie Idemne and Marilyn Marquina, and Housekeeper Khalifa Shehe, who were each celebrating 20 years with the charity. All four staff members received vouchers as thanks for their service and dedication.

Lead Healthcare Assistant Emrys, from Dorking, joined the charity in 1982, aged 23. He was originally based in Richmond, before moving to the award-winning Surbiton Home in 2013. 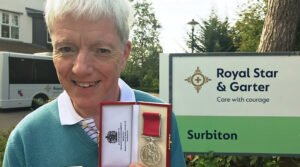 In 2021, he was awarded the British Empire Medal (BEM) for services to veterans during Covid-19 in The Queen’s New Year’s Honours List. He later described this as “the proudest moment of my life.”

Looking back on his time with Royal Star & Garter, Emrys, who spent 20 of his 40 years working night shifts, said: “To me it’s not just a job, I believe it’s what I was led to do with my life. When I think of all the various people I have looked after over the years I feel very lucky. I’m extremely proud and privileged to work for the charity and care for the people that we care for.”

Royal Star & Garter Surbiton Home Manager Helena Maher said: “I’m delighted to celebrate the dedication of these four members of staff, and especially Emrys. He is a great role model for his colleagues, while residents recognise the work he does in caring for them.”

Resident Michael said: “Emrys is such a respected member of the Home, and his devotion to his work is extraordinary. He does an excellent job.”

Director of Care Pauline Shaw, who celebrated 20 years with the charity last year, said: “Emrys is an outstanding carer. He is dedicated, compassionate and leads by example. We’ve been lucky to have Emrys for 40 years, I only wish we could have him for another 40!”