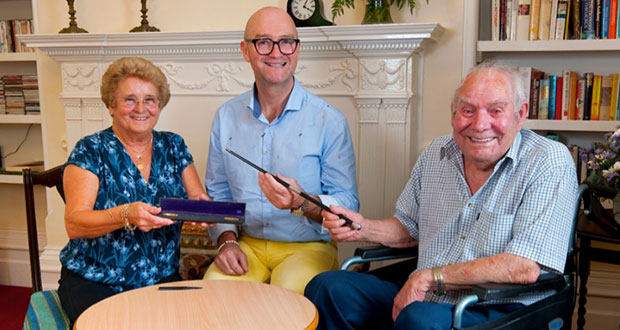 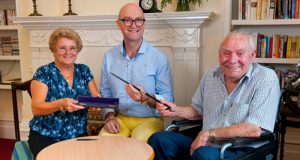 TV’s David Harper, star of the BBC’s Flog It, Bargain Hunt and Antiques Road Trip spent the day at St Cross Grange, speaking to residents and their families, and valuing objects brought in by them and other invited guests.

The baton belonged to resident, Bill Balding.  It’s an item he has treasured as it was given to him by his sister, Daisy.  Bill, who turns 91 next month, was very close to his older sister, one of eight in his family of 11 siblings.

“Daisy was given the baton after a concert performance when she was a student at a music college in London in the 1930s,” remembers Bill’s daughter, Lorraine Byrne.  “She went on to be a church organist and music was a huge part of her life right up until she died.  We have always been very proud of her.  She clearly was very talented and hard-working to be recognised by her tutors in this way.”

David Harper was fascinated to see the baton and said it was of extremely good quality.

“This was a lovely example of a rare silver and ebony conductor’s baton, circa 1910,” he said.  “I valued it in the region of £200 to £300.  Its value was increased by the fact it was by a London maker and still in its original box.”

Sentimental value was the order of the day for items assessed by David Harper, who entertained his audience with stories of his work on television and advice about what to collect.

“It was a great day,” he said.  “There were some really interesting objects and everyone was great fun.  Plus, the weather was glorious!  St Cross Grange is a home in every sense of the word.  I was really struck by how comforting it felt and the obvious caring nature of the staff.”

Susan Munro, manager of St Cross Grange, a 64-bed care home specialising in dementia care, said: “Everyone enjoyed the day very much.  David was wonderful and it was so nice to see Bill’s reaction to learning more about his sister’s baton.

“It was also a chance for local people to get to know St Cross Grange a bit better.  Because we care for family loved ones our home is very much part of the local community and we like to open our doors and welcome people in whenever we can.”