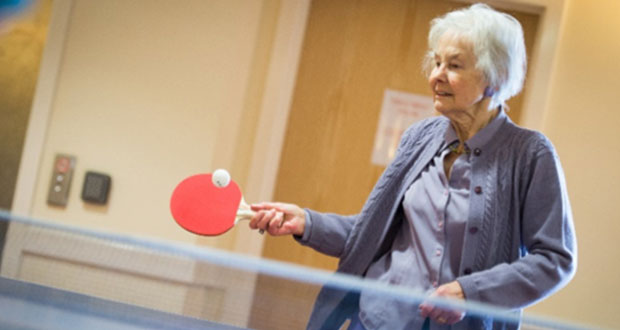 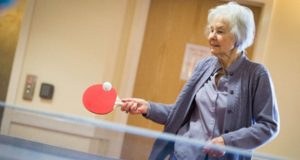 Residents and members of the team at Cherry Garth care home at Holmer Green, High Wycombe, inspired by Rio fever, have taken up playing ping pong.

The care home, which is run by local charity, The Fremantle Trust, has introduced table tennis as a regular activity on the back of research which shows it can help reduce cognitive decline and improve long-term memory for those living with dementia.

As an interactive pastime, it has also helped to boost social activity and physical wellbeing and may be rolled out across the group, based on its successful take-up.

Research carried out by The BAT (Bounce Alzheimer’s Therapy) Foundation, in collaboration with Kings College London, examined the effects of table tennis as a valid drug free therapy for early onset Alzheimer’s.

A primetime documentary screened earlier this year, entitled How to Stay Young, looked at the benefits of the sport. Table tennis players filmed as part of the programme showed an increase in the thickness of their cortex – the part of the brain associated with complex thinking and the part which shrinks most as we age.

While the table tennis activity is sparking nostalgia among residents at Cherry Garth, it is at the same time combining hand-eye coordination with fun and getting active.

Commenting on the initiative, Junior Walker, regional leisure and lifestyle team manager at The Fremantle Trust said: “Introducing table tennis to our programme of activity has been well received by both residents and members of our team. It’s a really interactive sport that can also be played sitting down and, though it’s quite fast paced, it’s all about taking part and having fun.

“Scientific research in this area is certainly giving us something to think about and we have seen there are genuine therapeutic benefits for residents, particularly those living with dementia.”