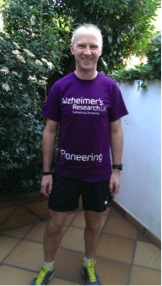 A Sheffield fundraiser has committed himself to an exhausting year-long challenge of running at least 5k a day to raise money for Alzheimer’s Research UK, the UK’s leading dementia research charity. Chris Wright, 46, was motivated to take on the daily challenge – which will see him clock up nearly 2,000k over the course of 2015 – after seeing several family members battle with Alzheimer’s and other forms of dementia.

Chris, who grew up in Sheffield, is a month into the challenge after starting on 1 January, and he has resolved that his next day off from running will not be until January 2016. As well as his regular daily runs, he is also planning to take part in several longer races throughout the year, including the Great North Run in Newcastle in September. Most of the web developer’s runs will be in Sitges in Spain, where he currently lives with his wife Sarah and their family, or in Amsterdam where he regularly travels for work.

Chris, a lifelong Sheffield United supporter, explained his motivation for setting himself the challenge
“It started after I’d heard about a few other people trying to run 5k a day and not managing to keep the challenge going for a year. I told Sarah I was thinking about doing this and before I knew it, she’d told everyone I was doing it, so I was committed! Ice, illness and injury permitting I’ll be out pounding the streets every day and so far it’s going well. In Spain I can run down to the seafront and I look forward to running, but in Amsterdam my timetable means I’ve been out in the dark, first thing in the morning, whether it’s raining, windy or cold!

“Sarah and I have run the Great North Run before to raise money for research, and we do it for her dad Les, who is in the late stages of Alzheimer’s disease and now lives in a care home. Seeing his decline is heartbreaking, especially for Sarah and her mum, and having seen other family members affected by dementia it’s something that terrifies me. I chose to support Alzheimer’s Research UK because I want to do all I can to find a cure for this cruel condition.”

Claire Priestwood, Regional Fundraising Officer at Alzheimer’s Research UK, said:
“This is an incredible challenge and we couldn’t be more grateful to Chris for his total dedication to the cause. Every £20 he raises throughout the year will be enough to fund another hour of pioneering research, bringing new treatments for dementia ever closer.

“There are nearly 7,000 people living with dementia in Sheffield alone and with no treatments to stop the diseases that cause it, we urgently need better ways to combat this devastating condition. We rely on the public to be able to fund our research programme, and it’s thanks to people like Chris that we’re able to continue our vital work.”

To follow Chris’ daily progress, visit his blog at chrswrght.wordpress.com, or to sponsor him visit www.justgiving.com/chris5kaday. To find out more about fundraising for Alzheimer’s Research UK, email fundraising@alzheimersresearchuk.org or call 07799 902428.