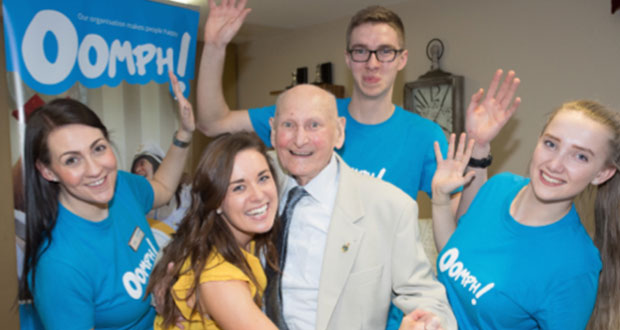 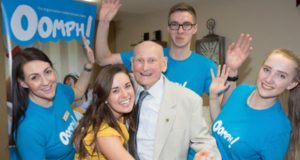 88-year-old Belong Warrington resident, Sam Clark, has been crowned winner of the ‘Oomph! Factor’ competition, a nationwide competition that recognises people who are enthusiastic about Oomph! fitness sessions. Oomph!(Our Organisation Makes People Happy!), is an award-winning social enterprise dedicated to enhancing the mental, physical and emotional wellbeing of older adults.

Sam was presented with his trophy at a special ceremony at Belong Warrington which was attended by Oomph! representatives and featured a personalised broadcast news report by ITV sports editor Steve Scott, who judged the competition. Oomph! have also paid for Sam to celebrate his victory in style with a visit to ‘The Rat Pack Vegas Spectacular’ show with his family.

Oomph! sessions are run twice a week at Belong Warrington and improve flexibility, social interaction and mental stimulation for older people through chair-based exercise, such as chair cheerleading and chair aerobics.

The Oomph! Factor competition sought to find the most enthusiastic Oomphers in the country. Judges chose Sam as the winner as he is a keen Oompher at Belong Warrington; he is always the first person in the class and never misses a session. After a fall in 2016, Sam lost much of his mobility, but thanks to Oomph! sessions and a tailor made Belong Warrington exercise studio programme, Sam is back to being the life and soul of the party and lives an active lifestyle.

Lisa McLaughlin, Belong Warrington’s Experience Coordinator, said: “Sam is an Oomph!-fanatic! We never have to encourage him to come to the sessions, in fact, he always reminds us early in the day and actually helps us to encourage other residents along too!

“It’s wonderful to see the positive impact that Oomph! is having on Sam’s general wellbeing and we are thrilled that his commitment has been recognised with this award.”