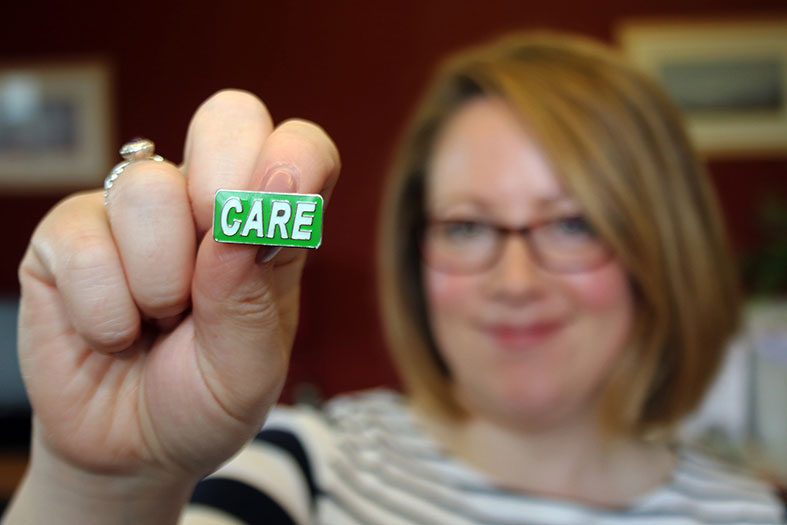 Providers are stepping up their campaign for a fairer deal for social care by urging the region’s MPs to show their support.

The Independent Care Group (ICG) is sending the new Care badge to each of North Yorkshire’s MPs and calling on them to back action to help the area’s oldest and most vulnerable.

This follows a move, when the ICG wrote an urgent letter to the new Prime Minister urging him to act quickly over the growing crisis in social care.

The Group’s Chair, Mike Padgham, said: “The Care badge is a strong symbol of the fight for greater recognition for social care in this country and we very much hope our region’s MPs will show their support not only by wearing it but by pressing the case for social care with the Government.

“For the sake of the 1.4m people in the country who are currently living without the care they need, we urgently need to win action from the Government to tackle the social care crisis.”

In its letter to Prime Minister, Boris Johnson, the ICG said:  “During your leadership campaign you promised to make social care a priority, pledging to end the situation where people have to sell their home to pay for care. We now call upon you to be true to your word.”

The ICG invited the Prime Minister to visit social care providers on the frontline at its base in North Yorkshire to see the challenges facing the sector. It is calling for urgent action to be taken straight away to get extra funding into social care, even if that is before the publication of the long-delayed Green Paper. It argues that there is a human case and an economic case for supporting social care. Support for social care eases pressure on the NHS by keeping people out of costly NHS hospital beds. The sector employs 1.62m – more than the NHS – and contributes £40.5bn to the economy.

The ICG says the past 17 years has seen 13 documents – four independent reviews/commissions, four consultations and five white and green papers on care. It argues that action, rather than further discussion, is now overdue.