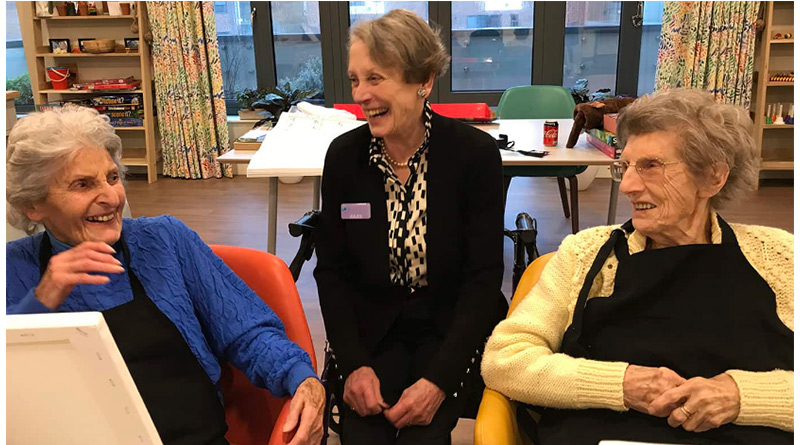 The widow of a decorated RAF pilot has spoken of her pride at volunteering in a local High Wycombe care home which bears her husband’s name.

Jules Bendell is one of the first volunteers to help out at Royal Star & Garter in Hughenden Avenue, which opened in April and provides loving, compassionate care to veterans and their partners living with disability or dementia.

The second floor of the Home is named Bendell House after her husband, following a public Who’s Your Hero? competition run by the charity to honour people with strong links to the military and the surrounding area.

Wing Commander Anthony ‘Bugs’ Bendell AFC OBE RAF was cared for by the charity at its Richmond and Surbiton Homes. Bugs, who was ranked among the RAF’s most skilled and talented pilots during the Cold War period, retired in 1987 after being diagnosed with multiple sclerosis. He had hoped to move into the High Wycombe Home and took part in its ground-breaking ceremony in 2016, but sadly died later that year.

Jules said: “I decided to be a volunteer long before I knew the Home would bear Bugs’ name, because I saw the good work the volunteers were doing when he was being cared for at Surbiton.”

Jules has been a frequent visitor to the High Wycombe Home, attending the Remembrance and Starlight services, and helping out with activities. She said: “I think the Home is fabulous. There is a warm, friendly atmosphere. All the staff are splendid, and the residents delightful. Royal Star & Garter is a wonderful charity and I am thrilled to be a part of it.”

High Wycombe Home Manager Chelle Daly said: “It’s an honour to have Bugs’ name gracing our Home, and I’m delighted our close connection with the Bendell family is continuing with Jules’ volunteering. We’re lucky to have her.”