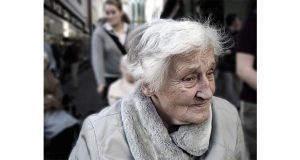 New research has found that a poor sense of smell could be an early warning for poor health in older age.

The study, published in Annals of Internal Medicine, revealed that a poor sense of smell was associated with 46 percent higher mortality after 10 years, compared with a good sense of smell.

Dementia and Parkinson’s disease were named as possible drivers but, together, explained less than a quarter of this increase in risk.

“Poor sense of smell becomes more common as people age, and there’s a link to a higher risk for death,” said Honglei Chen, an epidemiologist and member of the research team. “Our study is the first to look at the potential reasons why it predicts a higher mortality.”

The researchers reviewed and analyzed data from nearly 2,300 participants aged 71 to 82 who were part of the National Institute on Aging’s Health ABC study. Participants were followed for 13 years and the assessment included a smell test of 12 odors.

A poor sense of smell correlated with a 46 percent higher risk of death after 10 years and a 30 percent risk at 13 years.

The researchers accounted for several factors including sex, race, and lifestyle factors but the links stayed consistent.

Participants who were in good health at the start of the ABC study were at a higher risk which indicates that sense of smell should be taken seriously as a predictor of potential health problems.

A reduced sense of smell is an early sign of dementia and Parkinson’s, but these factors were not enough to explain the increased risk of death linked to smell and more research is needed to solve this connection.

“We don’t have a reason for more than 70% of the increased risk. We need to find out what happened to these individuals,” said Chen. “It tells us that in older adults, impaired sense of smell has broader implications of health beyond what we have already known. Incorporating a sense of smell screening in routine doctor visits might be a good idea at some point.”

‘We know our senses, such as smell, hearing and sight, have the potential to point to early signs of the diseases that cause dementia – just last year, we invested £5 million in research to understand how these and other factors could help us improve diagnosis, and understand how dementia develops.

‘It doesn’t look like our sense of smell can be relied upon to sniff out dementia just yet but, one day, research will beat dementia, and we’re going to keep working until we find a way to treat and cure it.’