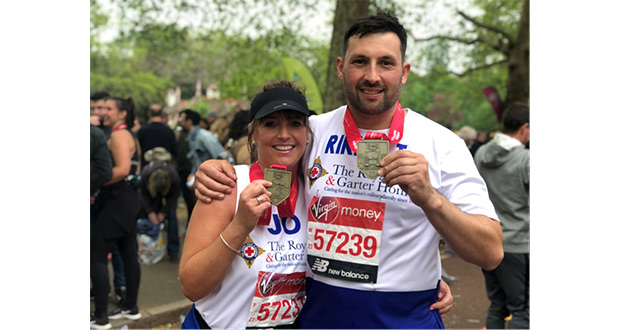 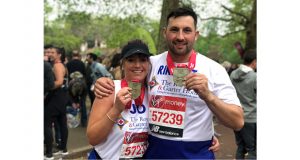 Joanna Arnold, Piers Fox and Rikky Toyer all completed their first ever marathons, collecting thousands for the Charity which cares for ex-Servicemen and women and their partners living with disability or dementia.

Joanna and Rikky ran together, providing support for each other, and completed the race in just over six hours. Piers managed to run his 26.2 miles in 4.06 hours.

Piers’ grandad Norman Knowles was cared for at the Charity’s old Richmond Home before moving to the Surbiton Home. He died in 2016. Before becoming a resident, Norman was a volunteer at the Charity, and would often take young Piers with him to help with residents. The Woking dad, 42, has raised close to £4,000 and said: “Physically, it was the toughest thing I’ve ever done in my life, the marathon felt never-ending! There were a couple of times when my feet were aching and I was struggling, but I thought about my grandad, and I looked at all the other people taking part and the crowd, and it got me through it.”

Rikky, 36, is a Royal Navy Commando who was inspired to run for The Royal Star & Garter Homes after a chance conversation with a friend. The Green Beret, from Boston, Lincolnshire, is a Helicopter Engineer with the Commando Helicopter Force and stationed at RNAS Yeovilton. So far he has raised over £600. He said: “The crowd were amazing and really helped get us through. It was great to have this opportunity and raise money for the Charity because it does great work and amazing things for veterans.”

Joanna, from Horsham, took part to thank the Charity for care it provided her grandmother Muriel Webster, who lived at the Surbiton Home for two years before her death in August 2018. The 35-year-old raised nearly £2,300.

Caley Eldred, Director of Supporter Engagement at Charity said: “I just want to thank Rikky, Joanna and Piers for raising this substantial amount. They each had very special reasons to choose to The Royal Star & Garter Homes, and I’m grateful they did.”