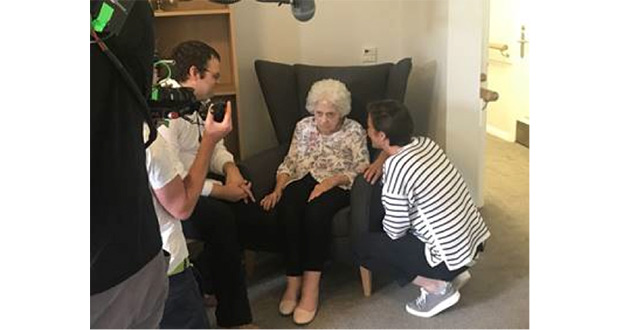 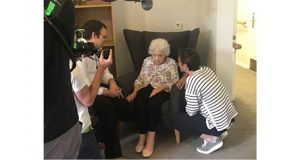 MHA care home resident Eileen Pegg is due to feature in a major BBC One documentary to raise awareness of the effect music can have on people living with dementia.

Eileen (91) is a resident at MHA Weston and Queensway House in Stafford and is living with advanced dementia. As part of her care, she receives life-enhancing music therapy – a service MHA has for residents living in its specialist dementia care homes.

As part of the documentary, the production company approached MHA to discuss and feature its pioneering music therapy service. As a result, Vicky visited Weston Queensway and joined Eileen and her music therapist Chris Wilson for a one-to-one session, which was filmed for the documentary.

Eileen and Chris’ music therapy session features in the second part of the documentary, which airs on BBC One on Thursday 9 May at 8pm.

Chris said: “Music therapy at MHA is very much a clinical intervention. We are not just playing and singing with our residents but looking for responses and reactions to music which we can then pass on to care home staff to use in day-to-day care.

“It might be a piece of music we discover that has a calming effect on someone, a particular beat which energises them or else a song which provokes memories. And the effect of music on an individual can be profound. In Eileen’s case, it has meant she has been able to hold conversations with her brother and chat with her carers.”

Music therapy sessions, both one-to-one and group, are provided free of charge to residents and funded by charitable donations and the re-investment of MHA’s operating surplus. It costs £30 to provide a one-to-one session like the one filmed for the documentary.

MHA’s Chief Music Therapist Dr Ming Hung Hsu said: “We know from research the difference that music can make to people living with dementia, from its onset right through to advanced stages. We were delighted to be asked to be part of the documentary and showcase how music can have a positive impact even at the latter stages of dementia.”