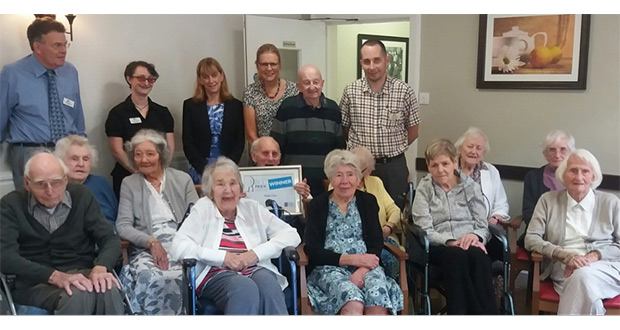 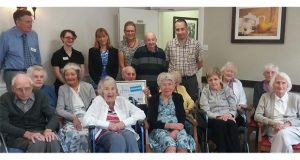 ‘Outstanding achievement’ and ‘an Inspiration to the Community’ were among the accolades heaped on the team at MHA Stratton House Care Home, who were presented with a Police Crime Commissioner’s Award.

Sue Mountstevens, Police Crime Commissioner for Avon and Somerset, spoke movingly of the inspiration represented by people who strive to make the community stronger by their actions, and said she was honoured to be able to bring the award to the home.

Stratton House hit the headlines in April with their challenge to Zoë Weston to cycle from Land’s End to Bath – and, declared the residents, we’ll beat you! And they did, using floor peddlers. The team, including residents, volunteers, families, staff and the local Methodist Minister, cycled 250 miles in five days – beating Zoë by just 30 minutes. Together the team and Zoë raised over £1,000 to help with making their garden more sensory friendly with raised beds and scented planting.

PCC Sue Mountstevens said: “It is incredible to meet some truly extraordinary people who have such a drive and passion for their local community. It is so easy to sit back and watch others do the hard work, but here, Zoe, Jack and all the residents involved have shown such dedication to support Stratton House.

“These are the people we rely on to keep a supportive and caring atmosphere in residential homes such as this. I think it is so important to highlight the incredible effort that Zoe has put in to helping inspire the residents and by raising money for their new accessible potting shed and garden area. Congratulations and well done to all those involved.”

Resident Heather Mackay (94) said: “Sue said we, as just a small group, had made a community – not just of ourselves but also as part of Bath community, We hadn’t just sat back and done nothing, but got on and done something towards making a better community.”

Liz Pippard (90), another resident, said: “Winning something like this is marvellous!  I’m ever so pleased!  It’s nice to have something you’ve done acknowledged. It’s nice to live here, we all feel like one big family.  We all really pulled together – it was very good to see that recognised.