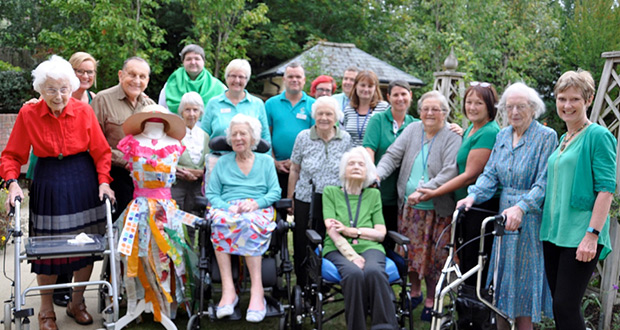 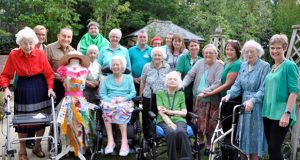 A care home provider’s bid to cut down on throwaway plastic is bringing out the ‘eco warrior’ among residents and team members.

Since Colten Care launched its Caring Without Plastic campaign in April this year, all its 20 homes have got on board with environmentally friendly ideas and initiatives.

Braemar Lodge in Salisbury held a ‘Green Day’ to celebrate progress so far, including a projected annual saving of 40,000 plastic bin bags for removing rubbish from the home’s 54 bedrooms, kitchen and nurses’ station.

In a revised approach, housekeeping staff have stopped re-supplying a daily plastic liner.

Instead, they remove non-recyclable waste in large washable fabric sacks, cleaning out and returning each bin there and then as part of infection control.

Bedrooms also have different bins for recyclable and non-recyclable items, with the bins themselves made from biodegradable plastic.

In a Green Day talk to colleagues and residents, the home’s ‘Green Champions’ – Kitchen Assistant Mikey Campbell and Domestic Assistant Martin Cannings – outlined a range of other initiatives the home has taken up.

These include recycling cooking oil into biodiesel, taking unused drinking water into the garden for watering flowers, and inviting family and friends to bring in printer cartridges for a Colten-wide recycling scheme which raises money for the Marine Conservation Trust.

Braemar Lodge resident Dennis Johnson, a member of the home’s six-strong residents’ recycling committee, said: “We are meeting regularly to discuss the disposal of rubbish and waste and how it can be recycled.

“We are strongly in favour of what Colten Care are doing to help the environment.

“Like anyone else, we’re concerned about cutting down the use of plastics as much as possible because it ends up in the ocean affecting fish, seagulls and wildlife generally.

“Where we can, we should all be looking at recyclable rather than single-use plastic.”

Alison Bremner, Braemar Lodge Home Manager, said many residents have been offering ideas based on a lifetime of experience.

She said: “Residents have seen a lot of changes over their lifetimes in how we interact with the environment and they are very much on board with this campaign.

“It is having a ripple effect around the home and among residents’ families and friends. We all want it to have a huge difference.”