The new National Living Wage (NLW) will deliver a welcome pay rise to between 700,000 and one million frontline care workers by 2020, according to new analysis by the independent think-tank the Resolution Foundation.

The Foundation – which earlier this year called for and costed a plan to make social care a living wage sector – welcomes the new ‘premium’ minimum wage, which should make a big difference to low-paid care workers.

However, implementing the new premium minimum wage will require significant new public investment in the social care sector, which has a very high proportion of low-paid staff and limited scope to absorb these higher wage costs through rising productivity. Rising demand for care will also increase the pressure on staffing and wage costs.

The analysis finds that the cost of meeting expected rises in the National Minimum Wage were already estimated to cost around a £1bn by 2020, a figure that will could double to £2.3bn with the new premium minimum wage (the so called National Living Wage) for workers aged 25 and over. However, savings to the exchequer via offsetting reductions to in-work support should significantly lower this figure.

This extra funding will need to be found amidst deep spending cuts in local government, which funds social care. The Foundation estimates that on average non-protected departments will face spending cuts of around 16 per cent by 2020, relative to their funding in 2010, and cuts to local government are likely to be significantly higher.

Failure to fund the necessary investment in social care could lead to more employers failing to pay staff the legal minimum, says the Resolution Foundation. Earlier RF research has found that 160,000 workers are currently losing out on around £130m a year through failure to pay even the NMW. This figure could rise significantly without extra resources and big improvements in enforcement.

The Foundation is urging the government to act quickly in making a commitment to fund higher pay in social care, which could make a huge difference to millions of workers, and the vital service they provide.

“The new ‘premium’ minimum wage is a welcome move towards tackling low pay, particularly social care where at least 700,000 workers are set to benefit.

“But implementing this new ‘premium’ minimum wage will be challenging in the care sector and will require significant new public investment. Failure to do this could result in a major escalation of the illegal ‘wage theft’ that already blights the lives of far too many care workers.

“It is unrealistic to expect councils to find this extra money given the scale of cuts they’re facing. It is important therefore that central government steps up and commits to providing this vital investment in social care, which will give a major boost to staff and improve the quality of care.” 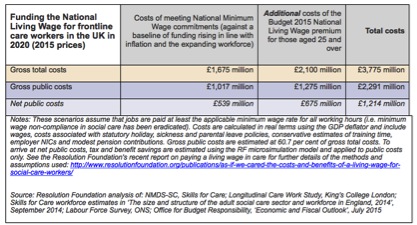