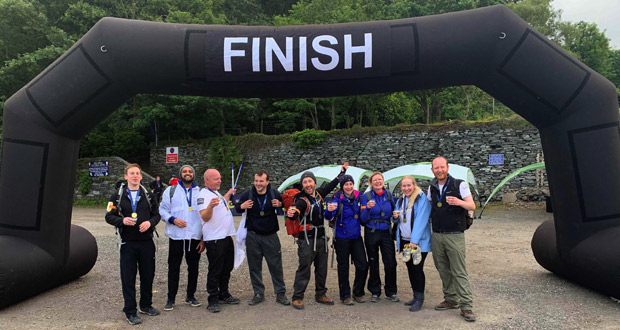 Employees from Orchard Care Homes have gone above and beyond to raise money for a leading industry charity by climbing the highest mountain in Wales.

Last month, an intrepid team of twenty staff took on the challenge of climbing Mount Snowdon by night! At 1,085 metres above sea level and located in Snowdonia National Park, it was truly a daunting proposition and one that the Support Centre and field-based staff took on with anticipation.

The team were raising money and awareness for the Care Workers Charity, an organisation that supports the basic welfare of current and former retired care workers. As a vulnerable workforce, when life takes a turn for the worse, the Care Workers Charity provides the support needed to weather the storm. With figures indicating that by 2025 one million people in the UK will be suffering from the effects of dementia and this number predicted to rise to 1,700,000 by 2051, the Orchard Care Home team wanted to highlight the importance that carers receive the support they need.

The team trekked through cold temperatures, wind, rain and fog and completed their journey in around four and a half hours, which is an astounding achievement, and raised an impressive £6,600 for the efforts.

Tom Brookes, CEO at Orchard Care Homes, led the expedition. After reaching the summit, he said; “I am so proud of the team, everyone was supporting each other to keep going, new friendships were built and most importantly, we raised money for a very important cause – the Carers Charity.”

Despite their exhaustion, the brave team laughed and joked as they were given a true hero’s welcome back at the company’s Support Centre in Harrogate, where they were greeted by a surprise welcoming committee complete with decorations, food and drinks.

Jennie Gaunt, Business Support Coordinators, shared her thoughts after the climb. “We spent lots of time together, sharing thoughts and personal goals, and I felt truly part of an amazing, supportive, family-friendly and motivated team. The welcoming committee was a great surprise as well and incredibly appreciated.”