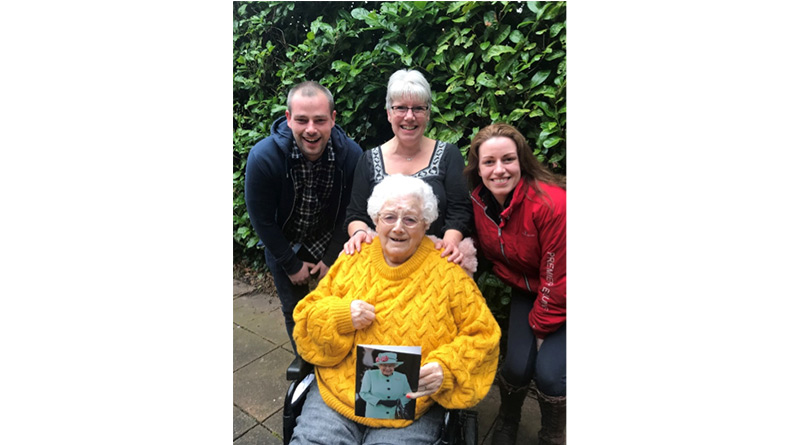 Phyllis was born on 14th March 1920 and grew up in Bootle, with her parents and two younger sisters, all of whom she has outlived.

She survived the house being bombed in Bootle in WW2 and latterly lived in Orrell Park.

Phyllis married Jim in 1959 and had one daughter Gillian.  She also has two grandchildren, Lesley and Steven and one great granddaughter Lucy, who lives in Portugal.

In her early years Phyllis was a great cyclist in her youth and loved dancing, becoming a member of Constance Millington’s ballroom formation team which is where she met Jim.

Phyllis enjoyed her Church life. She had served her local community as  Captain of the Girls Brigade with the 1st Liverpool Company at Lynwood Church, for approximately 30 years.

Phyllis, despite being registered blind in her 60’s, always remained independent until her stroke just before she was 98. She was given talking equipment including scales by Bradbury Fields and loved baking.  Phyllis was always out and about walking 4 to 5 miles a day and was an integral part of the local community borne out by the number of good wishes she received from old neighbours and friends on her birthday. Phyllis used to visit the “old people” in the community even though she was at least 20 years older than most of them!

Due to the Corona Virus situation all family members were unable to fly in and be with Phyllis and the party for all family and friends had to be postponed, but Stocks Hall made it a special time for her.

Phyllis received approximately 40 cards and was delighted with her card from the Queen and a telegram.

It was very evident that this lovely lady had poured so much of herself into serving others and a message on one of her cards said it all – “Thank you Phyllis for all the young people you nurtured  and guided through your many years at Lynwood Church. The Girls Brigade took up a lot of your time  but you never complained or let your standards slip and the discipline went a long way to forming the girl’s characters – making them to be people to be proud of – you should be very proud of what you have achieved.”