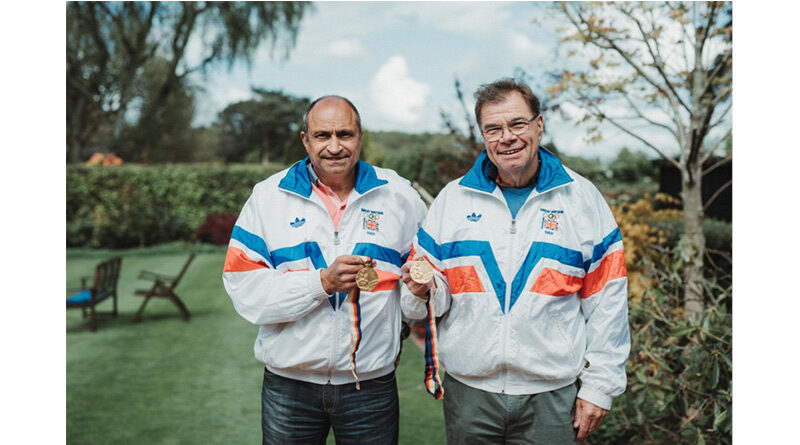 Imran, 59, who scored two goals in the final as Great Britain’s men’s hockey team won gold at the 1988 Games, was diagnosed with early-onset Alzheimer’s in December 2019, aged just 57.

The news comes as Steve Batchelor, who was also in the victorious Seoul Olympics side, has set up a team for this year’s Virgin Money London Marathon to raise money for Alzheimer’s Research UK in Imran’s honour.

Steve, who set up Imran for the third goal in the 3-1 win over West Germany that led to the iconic ‘Where were the Germans?’ commentary from Barry Davies, will be leading the team of runners at the marathon on Sunday 3 October.

Imran and his family first noticed problems in 2014 when he began to have difficulties with his memory. As his symptoms worsened, he struggled in his job as director of hockey and a teacher at a school and eventually had to retire.

“At first my mood changed and I became withdrawn. I wanted to be on my own and not talk to people. I started to struggle with tasks that ordinarily I would be quick to do, such as DIY. I also had difficulties in my job, such as forgetting pupils’ names, which was very frustrating.

“We weren’t sure what was causing it and thought it might be stress. I was initially dismissive of it. I knew I needed help, but I found it difficult to admit it.

“Eventually it got to the point that I was on the edge of breaking down because the situation had put such a strain on me, so I went to the doctor. That led to a three-year journey of tests and brain scans until I was eventually diagnosed with Alzheimer’s disease.

“I have gone from fighting the disease to accepting it, and that has made every day easier to live through. Every day of my life, I am thankful for having wonderful people around me, especially my lovely wife.

“I do not have fears about the future because I have always been very positive. I have had a brilliant life, I have achieved a lot in my career and with my family, so I can’t complain.”

“All of the 1988 Olympics team are still very close but, as we were both forwards, I have a particularly close relationship with Imran. We are good friends and our families are close as well.

“When I heard he had been diagnosed with Alzheimer’s it was a shock. At the time I didn’t know a lot about Alzheimer’s. I thought of it as something older people get. I didn’t realise it could affect someone as young as Imran.

“You feel helpless when someone you are close to is diagnosed with Alzheimer’s, so putting together this team for the London Marathon is something positive I can do to help.

“The team has just grown and grown. Quite a few of the people involved in the team have their own connections to the cause, with family members and friends affected by dementia, so it shows how this is something that affects so many people.

“We are determined to raise as much money as we can for Alzheimer’s Research UK to help find breakthroughs so in the future people won’t have to go through what Imran and his family are going through.”

“I’m so thankful to Steve and the team for raising money for Alzheimer’s Research UK. I’m looking forward to hopefully cheering everyone on at the marathon.

“I hope that dementia research can help improve diagnosis so other people won’t have to go through the lengthy and difficult process I went through, and that treatments can be found to help people in the future.”

“Imran and his team-mates became household names thanks to their iconic victory at the 1988 Olympics. To have someone of Imran’s standing speaking out about his diagnosis will help enormously to raise awareness of dementia.

“We are also so grateful to Steve and the team of runners who are raising money in honour of Imran at the London Marathon.

“Today, there are no effective treatments to slow, stop or prevent the diseases that cause dementia, but our scientists are working hard to change that. The vital funds raised will help us in our mission to make breakthroughs possible for people with dementia that will keep them connected to their families, their worlds and themselves for longer.”