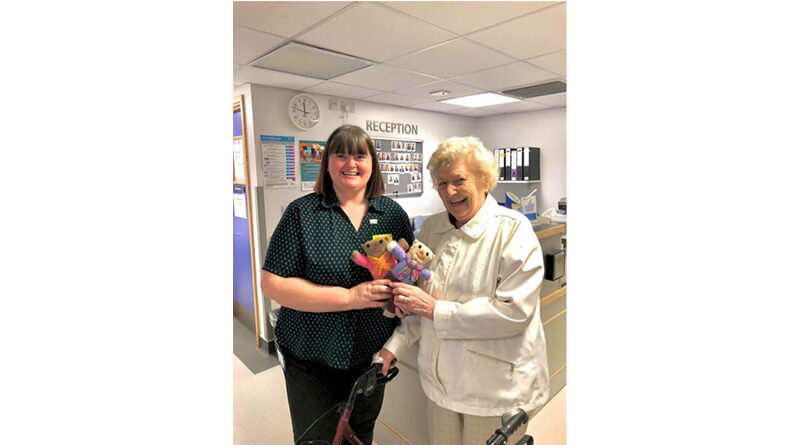 An 87-year-old care home resident from Ridgway Court in Farnham has knitted around 500 ‘care bears’ to give to newborn babies at Frimley Park Hospital maternity unit, as well as care home staff and residents.

When her husband of 43 years passed away, Edna realised that she needed to move into a care home. As a local resident for most of her life, she was familiar with the area and Ridgway Court, which was just up the road from where she lived.

Edna is a very keen knitter, and has been for many years. She says, “When I came to Ridgway Court, Senior Carer Debbie Pay gave me some square knitting patterns to begin with. I then moved on to teddy bears, and I’ve got so used to them that I don’t need the pattern any more!”

Indeed, Edna has given up counting how may teddy bears she has knitted, though she estimates it must be close to 500 by now. Debbie says, “Edna has been very generous and has donated them to her follow residents and our staff team, and our families too – even people just passing by the window have got one! I’ve also followed in her footsteps and made about 50, including some ‘care bears’ for my colleagues in full uniform and PPE.

“Edna is very quick and could probably knit them in her sleep. She is even knitting in our video tour of the home on our website – you can see some of her teddies, and you can also see me trying to keep up!”

“I put some of the bears on my window ledge,” says Edna. “I once saw a child walk past with her mother and she was looking up at the teddies. I opened the window and pushed one out. The girl said something to her mum, and then she looked up, and said that I must have dropped it. But I told her it was for her daughter.

“They must have been very grateful as they visited me that evening, along with the father. The daughter made me a card to say thank you. We’ve kept up the relationship and say hello each time they pass by.”

Word has spread about Edna’s teddies and now the local schoolchildren regularly look up on their way home to see if Edna has made a new bear.

Before lockdown, Edna used to make regular trips to Frimely Park Hospital to donate some of her teddies to the babies born there as a take-home present, for which she always received a thank-you card. After her first donation of about 100 bears, it transpired that the hospital had had plenty of knitted donations before – hats, blankets and so on – but this was their first of knitted teddies. Since lockdown, the Ridgway Court staff have continued making their deliveries, and Edna continues to receive her cards.

A Frimley Health spokesperson said, “We are so grateful to Edna and all the other people who take the time to make something special for our patients or staff. They are really appreciated and can make a big difference. The support we have received from the local community has been vital, especially in the past year, which has been extremely challenging for everyone.”

Edna said, “My great-granddaughter was in the hospital as a new-born, when she was unwell. At one point we weren’t sure if she would survive. The staff there were excellent and, after a couple of weeks, we were able to bring her home. It’s nice now to be able to repay them in some small way.”