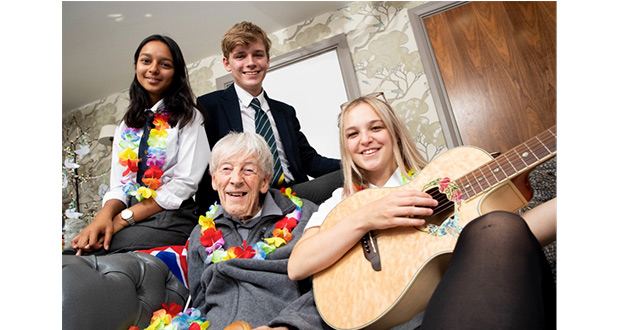 Pupils from The King’s School joined residents at Grosvenor Manor Care Centre on Heath Lane in Chester recently to show that there are no age limits to enjoying music.

Inspired by BBC Music Day which takes place annually, the old and the young came together at the care home to celebrate the power of music to improve and change lives, especially for those living with conditions such as dementia.

A group of 6th Form students from the top performing co-educational independent school located just outside of Chester spent the afternoon at Grosvenor Manor performing a range of songs from different eras for the residents and encouraging them to get involved too.

The musical event was the perfect tonic for-year- 94 year old Grosvenor Manor resident Harry Dison who has dementia.  Along with his late brother Gordon Dison, Harry has enjoyed a successful career in the arts, writing many songs for famous people, including the late Sir Ken Dodd, and has never lost his passion for music and performing his own songs.

During the afternoon, the Grosvenor Manor Wellbeing team and The King’s School students performed one of Harry’s songs; it was a truly magical moment, as once the team began to sing Harry remembered every word and sang along.

Wellbeing co-ordinator at Grosvenor Manor, Lisa Forth, commented: “After watching the BBC’s Dementia Choir, we invited The King’s School to join us for an uplifting afternoon of music.  Wonderful for all ages, music can decrease depression, anxiety and agitation, it can also boost cognitive skills, quality of life and emotional wellbeing.

“It is especially powerful for those living with dementia as it stimulates the brain triggering emotions and bringing back memories.  As we saw with Harry, even people with severe dementia can benefit from music and its deep emotional recall.  We are passionate about the power of music and the effect it has on our residents which we can see in their faces.”

The Music Teacher at The King’s School, Miss Krishna Banerjee, added: “We were delighted to be invited to Grosvenor Manor’s BBC Music Day celebrations; the afternoon was a great success and we hope to develop an ongoing partnership with the care home moving forward.  Spending time with the residents was wonderful for our pupils on many levels; not only did they discover a shared love of music but they also developed an enhanced appreciation of the elderly and their past lives and passions.