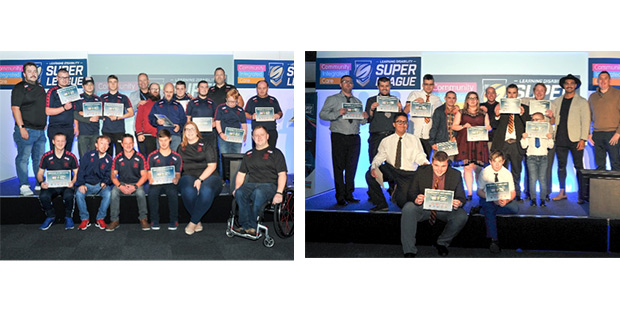 Players and supporters of the Community Integrated Care Learning Disability Super League marked the end of their ground-breaking inaugural season with a star-studded celebration at the Betfred Super League Grand Final at Old Trafford on Saturday.

Their special pre-match event at Old Trafford brought together more than 600 people who have supported the success of the programme this year, including players, coaches, volunteers, family members and partners of the Learning Disability Super League. The celebration, which was hosted by Sky Sports star Angela Powers, gave every participating player the chance to collect a well-deserved memento marking their brilliant year on the field, from a sporting hero.

The event was backed by the Rugby Football League and Super League, and a host of legends who have collected some of rugby league’s biggest honours throughout their careers. This included appearances from Wigan Warriors and Great Britain hero, Terry O’Connor, who is a Founding Ambassador for the programme, and Hull KR and Papua New Guinea icon, Stanley Gene, who has also signed up to support its ongoing success.

The present era of Super League stars was represented by Castleford Tigers outside-back, Peter Mata’utia, who was officially inducted at the event as an Ambassador for the programme.

The showcase at Super League’s biggest event was a fitting conclusion for a trailblazing first year for the project. The Learning Disability Super League is a collaboration between Super League, the Rugby Football League and one of Britain’s biggest and most successful social care providers, the charity Community Integrated Care. It has supported almost 200 people with learning disabilities and autism to fulfil their rugby league dreams this year, playing at inclusive festivals and iconic Super League events.

The celebration was delivered by Community Integrated Care, with sponsorship from their partners Mersten and Carbon Creative.

Our End of Season celebration event was amazing. I couldn’t believe how many Rugby League stars were there to support us! It was also a dream come true to step onto the field at the Super League Grand Final and share my story with thousands of fans. I would like to thank everyone who has supported the Community Integrated Care Learning Disability Super League and helped to make our special day possible.”

Speaking at the event, Mark Adams, Chief Executive of Community Integrated Care, says: “To welcome over 600 people to celebrate the success of the sport is just incredible. This programme has had a phenomenal impact in its inaugural season. It has offered the players unforgettable experiences, and helped to develop new friendships, greater confidence and life skills. As a charity that is absolutely committed to changing the lives of people with support needs and creating opportunities, we couldn’t be prouder.”

Terry O’Connor says: “It was really important for me to find time in my matchday schedule with Sky Sports to support this event. I’ve been lucky enough to be involved with the Community Integrated Care Learning Disability Super League since it first launched, so I’ve seen first-hand the difference that it makes. To me, this project represents the very best of Rugby League. It was a pleasure to have the opportunity to thank the players for their hard work and achievements this year.”

Peter Mata’utia, says: “I’ve loved seeing what the Community Integrated Care Learning Disability Super League means to the players. Their passion for rugby league and playing for their clubs is truly inspirational. To have the chance to congratulate the Castleford Tigers team, and every other player, for their hard work was a real highlight of my season.

It was an honour to be announced as an official Ambassador for the Learning Disability Super League. I’m excited to help this programme to grow, and to see many more special moments for the players and their families, in the seasons ahead.”