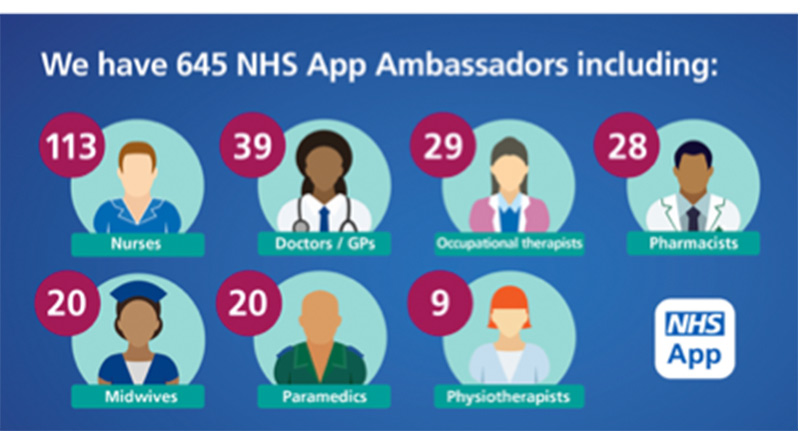 The number of patients using the NHS App has more than doubled since Chief Nurse Ruth May announced the ‘NHS App Ambassadors’ scheme in early September.

The number of NHS App registered users now stands at over 220,000 compared with 91,000 at the beginning of September. More people than ever before booked NHS appointments digitally choosing to use this route rather than calling their local surgery. In September there were 1.4million GP online service appointment transactions.

Since September, the NHS has been undertaking a campaign focused on its own staff encouraging them to download the app themselves.

The NHS App provides a simple and secure way for people to access a range of NHS services on their smartphone or tablet. Available to download on all IOS and Android devices, it allows you to manage repeat prescriptions, book appointments at your GP surgery, view your GP medical records, and much more.

645 App Ambassadors – frontline NHS staff who signed up to the scheme announced by Ruth May at Expo in September – have been working in their organisations and within their professional groups to encourage colleagues to use the app. Since the announcement, the number of patients using the NHS App has more than doubled.

They are spread right across England representing every staffing group including:

A toolkit of materials was also created for the use of communications teams across NHS organisations to use in their staff-facing channels.

“NHS staff play an important role in telling people about the NHS App and supporting them to use it. As members of NHS staff, we all use the NHS too and so we’ve been talking to staff about how the NHS App can really benefit them, especially given the busy lives so many lead.

“A growing range of digital tools are available alongside the NHS App, using the infrastructure we developed in building the app, giving people an important choice in how they access NHS services online. Our intention is to encourage NHS staff to help people to understand the choices available. This will mean that some people choose to use another tool instead of, or alongside, the NHS App. This might be an app they have used previously on a longstanding basis or one that provides an additional service that better meets their particular needs.

“We are getting terrific feedback that digital tools are helping put people in better control of their healthcare, and it’s important that, as more and more patients begin using digital routes to access the NHS, our NHS staff are well informed about them to be able to give their patients confidence, and what better way for staff to do that than be a user of digital tools themselves.

“I think it’s brilliant that we have hundreds of Ambassadors starting to spread the message about the services available to them to their colleagues right across the country and I want to say thank you to all of them.”