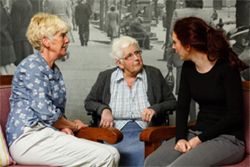 Just 28 per cent of adults would have their parents live with them if they needed full-time care, a national study has revealed.

Instead, 32 per cent wouldn’t let their parents move in, while another 36 per cent admitted they would have to seriously think about it.

20 per cent said they lack the necessary skills to look after their parents and one in 10 said their own health wasn’t up to it.

Financial reasons, having their own children still at home and not having a close relationship with their parents were the other factors adults listed as to why they couldn’t take on the responsibility.

This in-depth study of 2,000 people with parents aged over 60, conducted by leading independent health and social care provider Care UK, comes at a time when the Institute for Public Policy Research (IPPR)¹ has revealed its estimation that by 2030 there will be more than two million people aged 65 and over with no child living nearby to give care if needed.

Today, Care UK’s research has also revealed that two thirds of adults worry about the future care of their parents, yet most refuse to discuss the topic with them, and even less have made any plans.

According to the survey findings, 66 per cent of adults have never discussed the issue with their parents as either side may refuse to talk about it, or it simply hasn’t ever come up. In comparison, just five per cent discuss the topic regularly and one in five broach the subject from time to time.

Worryingly, only seven per cent of respondents said they have made plans for their parents’ future care.

With an ageing population and an expected increase in the need for elderly care services², Care UK say that this is a subject that needs to be discussed sooner rather than later.

Maizie Mears-Owen, head of dementia care services at Care UK, said: “We understand that the future care of a parent is an emotional topic and can be a difficult subject for many families to approach with their loved one. Discussing care plans with your parents can be upsetting, especially for the first time, but we encourage families to research and talk about their options so they can make informed decisions together.

“Support is available but it can often be hard to find. Talk to a financial advisor about your options and seek advice online. We work closely with families to understand their needs and advise on all the options of care available, from respite and care at home support through to nursing and residential care.”

Care UK’s research also discovered that sad, guilty, concerned and emotional are just some of the feelings that respondents said they would experience if they had to arrange external care for their parents.

In addition, the study found that while 37 per cent of those polled felt that a care home could provide better care for their parents, they felt guilty about arranging external care.

Maizie adds: “From our experience, the thought of moving parents into a care home can come with great concern. Often the decision is made at crisis point – when parents need a level of care which families may not be able to provide. This can lead to a big decision that nobody was prepared for, which only heightens the anguish for parents and their families.

“This is why we encourage people to discuss the subject of care with their parents before it becomes a necessity. This gives both parents and families a sense of control and also allows them to explore all the options available. For example, parents may not need full-time care, but there are day centre options in which parents can spend a few hours and receive vital care and support in a sociable setting. Having an open and honest discussion about this beforehand – and perhaps trying out the options available – can save a lot of stress and heartache in the future.”

Maizie concludes: “I think the idea of looking after your parents is very different from the reality.  This is perhaps why younger people are more open to the idea.

“As people get older, their own finances, how much space they have and bringing up their children are all factors which can make it harder for them to look after their parents. Again, this is why we encourage families to talk it through, see the best solution for all, and make the most of the help and advice available to them.

“Within the community there are many places people can ‘drop in’ to find out where to go for further support – such as a local care home or Citizens Advice Bureau. While online, carersuk.org is a great place to start. Taking this all-important step towards getting sound information and professional advice really can make a big difference further down the line.”

Reasons for not having ageing parents live with you

Reasons for not discussing future care plans with parents