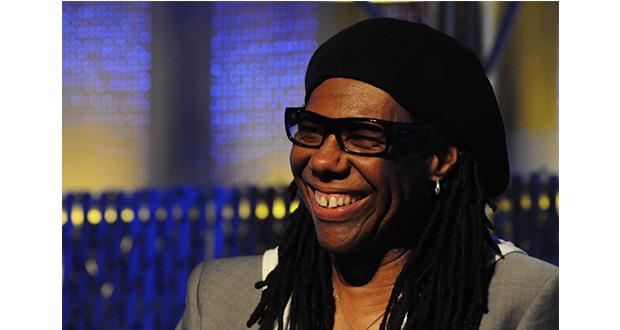 Musician and producer Nile Rodgers is to be this year’s ambassador for BBC Music Day as part of a new project to bring music to everyone living with dementia by 2020.

The legendary, multiple Grammy-winning musician, Nile Rodgers, says he is proud to be an Ambassador for BBC Music Day 2019. He wants to support this project as he has had personal experience with family members affected by the disease.

Nile says: “The UK is my home from home so I’m delighted to be an Ambassador for BBC Music Day and to highlight the important role music plays in the well-being of our society. I’ve witnessed my mother’s and my aunt’s experience with dementia and I know just how transformational music can be for people with this condition. I think this is a fantastic initiative, and the updated BBC Music Memories website is a brilliant way for people to identify personally meaningful music and to start to make a playlist so music can be used therapeutically. Everyone faces challenges at one point or another and music can be your greatest ally at those important times.”

BBC Music Day is collaborating with over 50 UK organisations involved with dementia care, reaching out through their networks and beyond to help people with dementia through music. And in September, BBC Music Memories will launch the latest version of its ground-breaking website. Created by BBC Archive Development, it has been designed especially for people living with dementia and aims to stimulate memory through music using the extensive BBC archives.

Rebeca Sandiford, Commissioner, BBC Music Day, says: “We’re inviting all organisations and individuals to get involved to join us to help change lives through music. We’re encouraging people to visit the BBC Music Memories website to make a playlist or attend one of the inspiring music events taking place around the UK.”

The organisations involved will be supersizing their usual activity in the week of Music Day to spread the message about the power of music to change lives. Events include the first music and dementia festival co-created by people living with dementia, the NHS’s first dementia village holding a music event ahead of its official launch, Alzheimer’s Society’s Singing for the Brain groups gathering across the week, Live Music Now musicians performing in care settings, intergenerational concerts, plus an online musical map will launch listing a range of music services for people living with dementia and their carers. Organisations already taking part include Alzheimer’s Society, Age UK, Alzheimer Scotland, Dementia UK, Live Music Now, NHS England, Nordoff Robbins, Playlist for Life, Utley Foundation and many more. Those involved in dementia care and people with dementia are all invited to get involved to raise awareness of the positive impact music can have. Find out more at bbc.co.uk/musicday