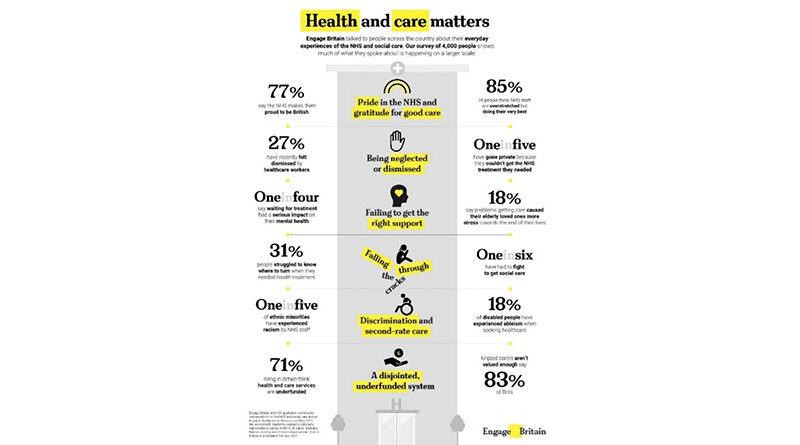 New analysis today reveals the NHS unites us in being ‘proud to be British’ – a sentiment shared by over three quarters (77%) of Brits, including the majority of Scots and Welsh people.

Engage Britain held 101 discussion groups across the country to explore Brits’ day to day experiences of the NHS and social care. The issues people spoke about informed a survey of 4,000 adults which revealed many of these problems are happening far more widely. The results show very large support for staff, but also serious concerns from millions about their care.

The Engage Britain and Yonder poll showed one in five (21%) saying they’d been forced to go private because they couldn’t get the NHS treatment they needed. And with waiting times rocketing, one in four (25%) say the wait for treatment for themselves or a loved one has had a serious impact on their mental health.

Other experiences people face with the NHS and social care right across Britain include:

But the vast majority of people also feel NHS workers are facing an uphill battle. A huge 85% of people think staff are overstretched but doing as much as they can with their resources.

The discussion groups and analysis from Engage Britain are part of a ground-breaking national drive to give people a say on what matters most to the country. The aim is to find answers to Britain’s biggest problems by grounding them in people’s everyday lives.

Following the discussion groups on the NHS and social care, Engage Britain will hold a citizen’s assembly to discuss people’s day to day experiences and start to work out realistic plans for change.

Despite the polling showing millions having been let down while seeking treatment, love for the NHS endures – with 38% saying although they’ve had bad experiences they’d never want to lose it.

Engage Britain Director, Julian McCrae, said: “The NHS unites so many of us with a feeling of pride. But the fact is millions are also being let down every day by our health and care services.

“People right across the country told us they’re feeling ignored or dismissed or are turning to private treatment because they have little other choice. And overworked staff are being pushed to breaking point.

“It’s vital that future changes, including those in the NHS Reform Bill, address the daily challenges that so many in Britain are facing. Only answers rooted in real experiences can deliver health and care that works for us all.”

For more information on what matters to people in Britain about health and social care go to engagebritain.org