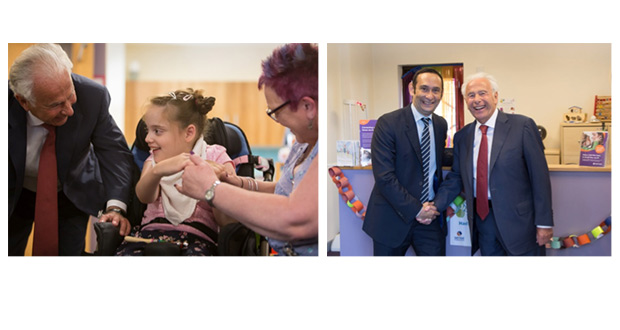 The first President in the charity’s 64-year history

The national disability charity, Sense, has appointed Lord Levy as its new President. He becomes the first to fill the role in the charity’s 64-year history.

Lord Levy has committed his life to work in the charitable sector and is currently President of Jewish Care, Barnet & Southgate College, Jewish Free School (JFS) and Jewish Lads’ and Girls’ Brigade (JLGB). He was previously President of Volunteering Matters and Chairman of the Academies Trust in Education, and has headed a number of other organisations over many years.

The announcement follows the publication of the charity’s new strategy: ‘No one left out of life’, which sets out how it will reach more families and people with complex disabilities over the next three years.

Sense Chief Executive, Richard Kramer, who welcomed Lord Levy to Sense’s Family Centre in Barnet on Thursday 29th August, said that the appointment will play a vital part in helping the charity deliver on its vision.

“Lord Levy has achieved an astonishing level of success for the causes he has supported, and we’re privileged to appoint him as President of Sense and Sense International.

We believe he will play a vital part in helping us deliver on our ambition of reaching more families and people with complex disabilities.

We will benefit from his wisdom, energy and compassion, driven by a shared belief that no one, no matter how complex their disabilities, should be isolated, left out, or unable to fulfil their potential.”

“I am delighted to be appointed President of Sense.

I have been touched by the incredible work the charity does to support some of the most vulnerable people in society. This work has never been of greater importance, and it’s why I’m honoured to be asked to support them in this role.

I look forward to working with the whole organisation to support them in their mission to bring positive change for people with complex disabilities and their families.”

Lord Levy will support with creating projects, hosting events and offering guidance to the charity’s leadership. He will join HRH The Princess Royal, who has been Sense and Sense International Patron since 1989.

Will the mental Health Market Continue to Grow?

The UK market for independent mental health hospitals grew by 4.1 per cent to £1.8 billion in calendar 2018.

Growth is projected to take the market value to £2.3 billion by 2023, in line with the 5 per cent yearly growth allowed for in the NHS funding settlement. With public pay (as opposed to private individuals or insurers) accounting for 90 per cent of this market, the market has been driven, and is likely to continue to be driven, by growing NHS expenditure on mental health services. The goal of ensuring that mental health gains parity with physical health in terms of how it is viewed and treated contributes to this trend.

Independent providers will hope that profitability improves as the financial pressures on the NHS ease. While not finally adopted at the time of writing, the indicative NHS tariff uplift has been set at +3.9 per cent for 2019/20.

However, the scope for growth and improved profits for independent providers cannot be taken for granted. Positively, there remains an NHS England moratorium on the commissioning of new capacity. Also, many local NHS Mental Health Trusts focus their in-house capacity on supporting the broad needs of their local populations rather than investing in specialised services.

Specialisation remains the main strength of the independent sector, even in the face of in-house NHS capacity growing, and especially if independent providers can demonstrate their value for money. This attracts controversy in that some patients have to travel long distances to access appropriate treatment owing to an unequal distribution of facilities across the country, but it prevents national shortages in specialist care. It has also created a certain amount of ‘churn’ at establishment-level as hospitals have opened and closed to meet changing patterns of demand from the NHS.

Specialism is likely to continue to provide the springboard for expansion. Much of the new NHS targeted spending is currently earmarked for community-based services. These are mainly provided by the NHS in house and this is not expected to change. As a result, opportunities for growth are likely to lie in expansion into the larger adult specialist care home sector.

“While there is greater prevalence and recognition of mental illness, these are not strong drivers of demand in the independent mental health hospitals in of themselves. Far stronger is the greater funding priority being afforded to mental health in line with the ‘parity of esteem’ mantra and also the fear factor which is leading to a rising trend in detentions indicating a weighting towards the protection of society as opposed to the right to liberty.

“Continued NHS outsourcing is also a major driver and while the past two years have seen a stop in the decline in NHS in-house mental health bed capacity, ending a four-decade trend, the prices offered by the independent sector are comparable with the NHS’s in-house costs. Also, the NHS has limited capital budgets, suggesting that there be restrictions on how much further capacity can be created.

“In addition, while the government has a focus on ending inappropriate out of area placements, most of which are in the independent sector, there appears to be little appetite on the part of Trusts to set up specialised services which would need to attract out of area placements to be viable.”