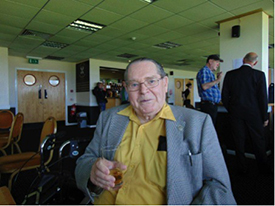 Life-long Fulham fan Ronald Hudson, 89, has fulfilled a lifetime’s ambition to watch his beloved team play in person for the first time.

When Ian Darling, the Development Manager at Bield’s Woodland Care Home in Bo’ness, first noticed that Fulham were planning an away trip to East Fife, he instantly thought of Ronald – and sought to make sure the opportunity to see his boyhood team was not missed.

After a little consideration, and once consent was given from Ronald’s family allowing Ian to accompany him to the game, he decided to surprise Ronald with the tickets, which he had paid for personally.

Ronald was raised until the age of six in the Borough of Fulham, before moving to an orphanage in Kendal, Lake District. He eventually worked as a gardener before becoming an active figure in local politics – at one stage becoming Vice-Chairman of the Labour Party in Grangemouth.

Ronald said “Living most of my life so far from Fulham, and being especially busy with work meant that I was never able to attend a game.

“I have always followed the team closely – and have stuck with them through the good times and the bad.

“The experience was incredible and I am so grateful to Ian for arranging the tickets, and for taking me along.

“A plane full of Fulham fans made the journey from London, and after hearing that it was my first experience, they made sure it was an unforgettable one – they really made it feel special and even taught me a few songs, which we all sang as the team went on to win 3-0.”

Ian Darling said: “It was a memorable day for all involved – and to share the experience with Ronald, one of our longest-standing residents was an extra treat. We even enjoyed hospitality, and Ronald was greeted by the East Fife Chairman.

“Woodlands always looks to embody the Bield ‘Free to Be’ philosophy, seeking to enrich the lives of our residents as much as possible. So it was great to take this opportunity to really make great memories for Ronald.

“As I understand, Ronald is keeping a close eye to see if they will be venturing North again – hopefully next time as a Premiership outfit!”