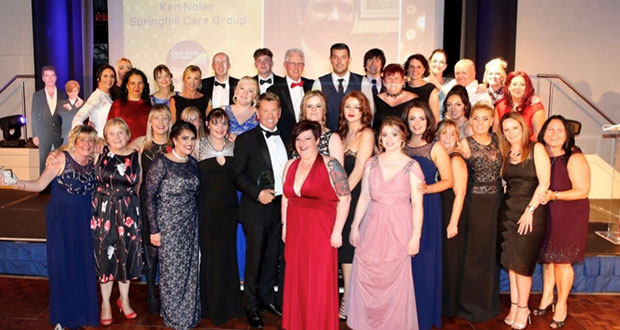 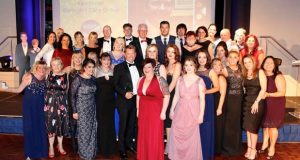 The chairman and founder of Accrington’s Springhill Care Group has been honoured for the role he has played in the region’s care sector.

Ken Nolan was named the winner of the Outstanding Contribution to Social Care award at the North West finals of the Great British Care Awards.

Also honoured was Virginia Perkins, head of human resources for the group, who won the Care Newcomer Award.

Springhill Care Group operates homes in Accrington, Skelmersdale and Bristol, along with a supported living service, also in Accrington.

The Great British Care Awards are a series of regional events throughout England, designed to celebrate excellence across the care sector.

The awards feature 21 categories, and include all areas of the sector such as older people, specialist services or residential home care.

Winners of the regional titles go on to take part in a national competition.

Ken Nolan of Springhill Care Group said: “I feel humbled and privileged to have won this award.

“As we know, good care requires a great team effort; this is only achieved thanks to the dedication and commitment of all the outstanding people I am privileged to call colleagues and friends.

“Springhill Care Group has always worked hard to support its staff and to help their development, and I’m delighted that Virginia and Trudy were also recognised.

“Like all our staff, they work hard, often going that extra mile, to ensure our residents have the highest possible level of care.”

Earlier this year Springhill Care Group launched its Caring Heroes campaign, to highlight the work being done behind the scenes by care staff across the country. To join the conversation on social media, and highlight examples of good care, use the hashtag #caringheroes.