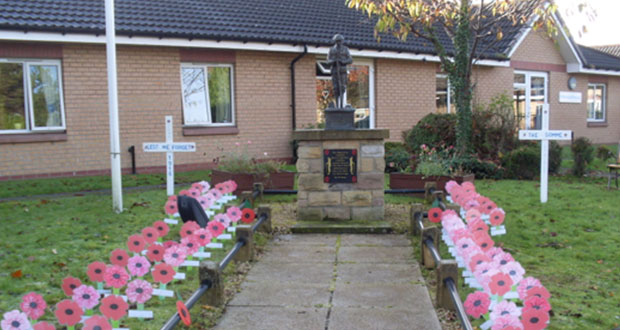 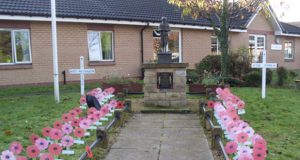 A Bellshill care home has paid tribute to Remembrance Day by creating a decorative memorial filled with red poppies.

Bupa’s Hattonlea Care Home, on Reema Road, organised the commemorative piece to be exhibited in its garden on November 13th to mark the annual day and honour all those who have been affected by or lost their lives in war.

The care home already has a unique war memorial statue in its grounds, which was built to pay a poignant tribute to the 100th anniversary of the start of World War One. The bronze statue of a Scottish soldier allows residents to commemorate various war memorial events without having to travel far from the care home, and this year’s Remembrance Day saw them do just that.

Residents joined together to hand make and decorate poppies which were then placed in the garden of the home, next to the memorial monument.

June Sugden, Home Manager at Bupa’s Hattonlea Care Home, spoke of how she wanted to make sure the home honoured the commemorative day appropriately.

She said: “Remembrance Day is always a landmark occasion for our residents and we wanted to create an event that allowed our residents to pay tribute to the occasion as actively as possible.

“Our war memorial statue has become a strong focal point in the home – and no more so during important commemoration events.

“Creating a display of poppies that were then displayed next to the statue also encouraged our residents to spend time together, being creative and interacting and socialising with their peers.

“We are very proud of everyone’s hard work and we will look to maintain the poppy display, to keep the spirit and memories alive.”

“Our research is starting to show two possible explanations – students’ expectations don’t match the reality of working in the industry, and students are entering the industry, but they’re not staying. It’s critical that we develop strategies to encourage progression and development of chefs in order to aid retention and enable businesses to operate effectively and remain competitive.”