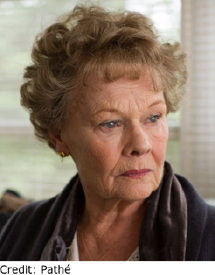 Oscar winning actress Dame Judi Dench has won a prestigious Older People in the Media Award for her role in the film Philomena.

Dame Judi Dench said of receiving the award, “It can’t possibly be for me – I’ve only been in the business for 60 years. Thank you very much indeed for this award.”

The journalist and broadcaster John Sergeant hosted the special ceremony at The British Library in London yesterday evening, where 10 Older People in the Media Awards were announced.

The awards, which are organised by older people’s charity, Independent Age, and sponsored by care provider, Barchester Healthcare, recognise and reward excellence in the coverage of older people’s issues. They aim to encourage wider public debate about older people in society, and the issues affecting them.

Dame Judi’s award for Best Older Person’s Character in a Film, TV or Radio Drama is a special category, voted on exclusively by users of Gransnet, the social network for the UK’s 14 million grandparents.

Dame Judi Dench was awarded the title for her role as Philomena, in the true story of Philomena Lee, an Irish Catholic woman and her efforts to find the son she was forced to give up for adoption.The rest of the nominees in Dame Judi’s category were Roger Allam, who was nominated for his role of Fred Thursday in ITV’s Endeavour, Stephen Rea for Sir Hugh Hayden-Hoyle in BBC2’s The Honourable Woman, Timothy West for Stan Carter in BBC1’s EastEnders, and Sarah Lancashire for Catherine Cawood in BBC1’s Happy Valley.

Other Older People in the Media Award winners included AA Gill, the writer and critic, who picked up the title for Best Factual Newspaper or Magazine Article about Older People’s Issues. Mr Gill’s article in the Sunday Times, Life at 60, is a thoughtful portrayal of reaching an age milestone.

AA Gill on hearing he had won the award, said, “I am of course grateful to be given this award. I am very aware that there is little grown-up writing for or about the aged. It is all telling us to stay as young as possible, that 60 is the new 40. It isn’t. And anyway I hated being 40. Age is what it is, and it is childish and patronising to pretend we can wish it away. Mostly I am pleased to get this award because frankly there aren’t going to be that many gong opportunities left to me.”

John Sergeant, Host and Chair of Judges for the Older People in the Media Awards 2014, said, “The evening’s Older People in the Media Awards has celebrated the amazing contribution that older people make to our society. It also highlighted the very worst treatment that older people can receive as a result of being elderly. All of the coverage the judges saw, read and listened to reminds us that no matter how old someone may be, they should be equally valued and respected by us all.”

Janet Morrison, Chief Executive of Independent Age, said, “It was a landslide victory for Dame Judi Dench. She won because people loved her portrayal of someone who was at once kindhearted, stubborn, forgiving and dignified. What’s great about all of the nominations is that they raise different and important issues around ageing. These awards also show that older people can be central, fascinating figures, who are capable of holding the limelight in their own right.”

Dr Pete Calveley, CEO at Barchester Healthcare, said, “This is the third year that Barchester have supported Independent Age’s Older People in the Media Awards and we are extremely proud to be involved. From the inspirational work of Dame Judi Dench to the personal blogs of Pippa Kelly, this year’s winners highlight a wide range of important issues. It’s vital to continue to applaud the very best in the media on issues affecting older people, and I’m hopeful that these issues will receive increased attention across new and traditional media platforms.”

More information about the Older People in the Media Awards 2014, including full details of this year’s shortlisters and winners, can be found at www.independentage.org