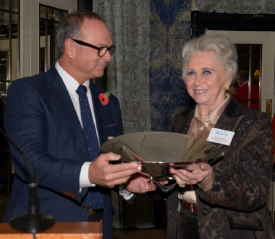 Margaret Miller, Chairman of Bradford-based Knightsbridge Furniture, has been presented with a ‘Lifetime Achievement Award’ by the British Contract Furnishing Association.

The award was formally presented during the BCFA’s 2014 Industry Luncheon, which was held at The Dorchester in London and attended by some 500 association members and their guests.

‘I’m both honoured and humbled to receive such a tribute,’ said Margaret Miller on accepting the specially-engraved platter from Tony Attard OBE, BCFA Director and Managing Director of award sponsors PANAZ Limited. ‘It’s particularly moving to be honoured by one’s peers in this way in front of such a large gathering, many of whom I have come to regard as personal friends.’

Margaret Miller has been associated with the contract furnishing industry for over 50 years, having begun her career with Knightsbridge Furniture in 1959. Since then, in addition to steering the company’s development as an internationally-respected designer and manufacturer of furniture for the healthcare and hospitality sectors, she has held many positions within the wider industry: currently, Margaret is a Director of the BCFA, a Council Member of the Furniture Industry Research Association and a Liveryman of the Worshipful Company of Furniture Makers.

In 2008, Margaret Miller was appointed Master of the Furniture Makers Company, the first and only woman to hold the office. A tireless fundraiser, she was also co-founder and trustee of War on Cancer, a charity which raised over £4m for research at the University of Bradford into the causes of cancer and its treatment at Bradford Royal Infirmary.

Encouraging young people to pursue careers in industry has always been of particular interest to Margaret, and she ensures that at least 10% of the workforce at the Knightsbridge plant in Bradford is employed on apprenticeship schemes. ‘Perhaps Margaret’s greatest achievement is the vast number of people in the contract furnishing industry – especially students – who regard her as their inspiration,’ said Tony Attard on presenting Margaret Miller with her award.