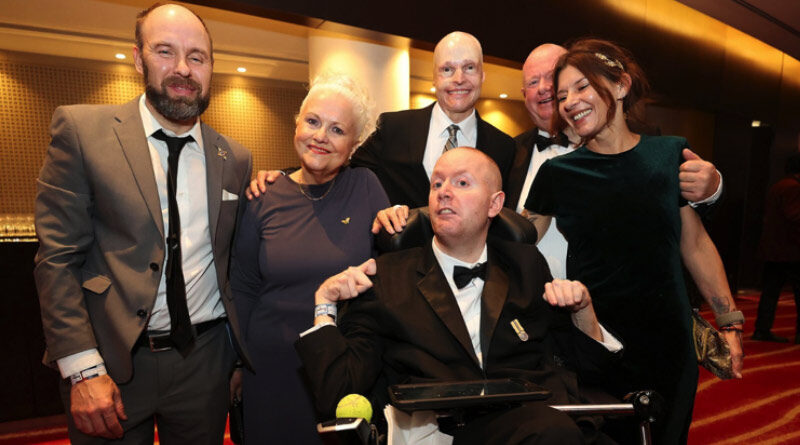 Iraq War veteran Stephen Vause was a guest of honour at a glittering Soldiering On Awards ceremony after winning a prestigious prize.

The 35-year-old, a resident at Royal Star & Garter, won Soldiering On Awards’ Inspiration category in 2021. A gala dinner was due to take place in December that year but was postponed due to Covid.

The black-tie dinner brought together the finalists and winners from the 2020 and 2021 Soldiering On Awards, as well as announcing the winners of 2022, at Park Plaza Westminster Bridge Hotel on Thursday 27 October.

Army veteran Stephen, who suffered traumatic head injuries in a mortar attack while serving in Basra in 2007, won the coveted Inspiration award in a public vote, after raising thousands of pounds for Help for Heroes from his room at Royal Star & Garter in Surbiton, with the support of care staff.

He attended the dinner with his father James and staff from Royal Star & Garter, a charity which provides loving, compassionate care to veterans and their partners living with disability or dementia.

Afterwards, Stephen said:
“It was a privilege to be at the Soldiering On Awards. The room was filled with people whose inspiring stories demonstrate huge courage and bravery. It felt amazing to be part of that.”

Stephen, whose injuries left him using a wheelchair and communicating using a tablet, undertook a gruelling 60-mile virtual London to Brighton cycle ride at Royal Star & Garter during the second lockdown, in early 2021.

With the help of Royal Star & Garter staff, he completed the challenge on his adapted static bike in six weeks, raising more than £5,000 for Help for Heroes.

His Soldiering On Awards success was praised by the then Prime Minister Boris Johnson, who said: “Stephen has shown remarkable courage in dealing with his injuries and great fortitude in raising money for Armed Forces charities. I take my metaphorical hat off to him for his latest fundraising exploit. I am full of admiration for him.”