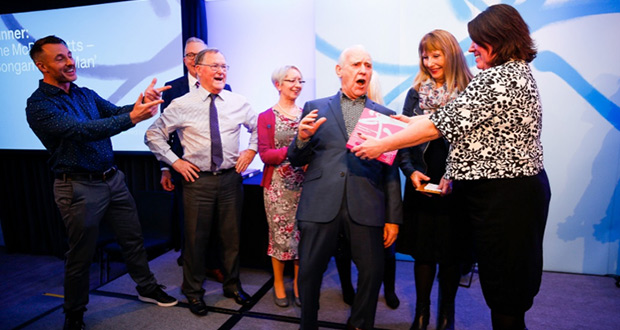 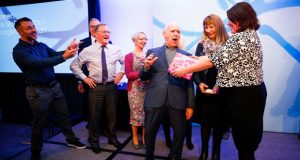 The son of internet singing sensation Songaminute Man has been honoured for his “phenomenal” fundraising efforts at Alzheimer’s Society Dementia Friendly Awards 2017.

Simon McDermott catapulted dad Teddy, who is living with dementia, to fame when he shared Carpool Karaoke-style videos of them singing together. The videos went viral across the internet and Simon used their new found fame to raise money for Alzheimer’ Society.

By raising money for the charity, Simon was paying tribute to Alzheimer’s Society’s National Dementia Helpline team who helped his family deal with his dad’s dementia diagnosis and declining condition. Despite setting a fundraising target of £1,000, Simon and Teddy raised an incredible £150,000 .

And by uniting against dementia, Teddy, a former Butlin’s Redcoat and Club singer, was able to achieve a life-long dream of becoming a recording artist

He did so by recording a single – You Make Me Feel So Young – with Decca Records at the Abbey Road Studios made famous by The Beatles and then this year released an album to raise money for Alzheimer’s Society.

Simon, who now lives in London, had his efforts recognised when he won the Fundraiser of the Year (Individual) Award at the Alzheimer’s Society Dementia Friendly Awards ceremony which took place at County Hall, London.

And his dad celebrated Simon’s award in style by taking to the stage and belting out an impromptu rendition of his hit single – the delight of fellow music-lovers.

‘We didn’t expect this and we have just wanted to make a difference as we know what it is like to be affected by dementia and we want to give something back to Alzheimer’s Society.

‘The Alzheimer’s Society National Dementia Helpline was really helpful and I always say that if it wasn’t there then I am not sure what I would have done. For me, that’s what was really important.’

‘The journey that Simon and his dad, Songaminute Man Teddy Mac, have been on is truly extraordinary on so many different levels.

‘Not only did they raise vital funds for Alzheimer’s Society services like our National Dementia Helpline, which supported Teddy’s family, but they showed what can be achieved when people come together.

‘Their Carpool Karaoke-esque videos were a powerful and moving illustration that music can have a positive impact on people living with dementia and the release of his album proved you can fulfil your dreams even after a dementia diagnosis.’