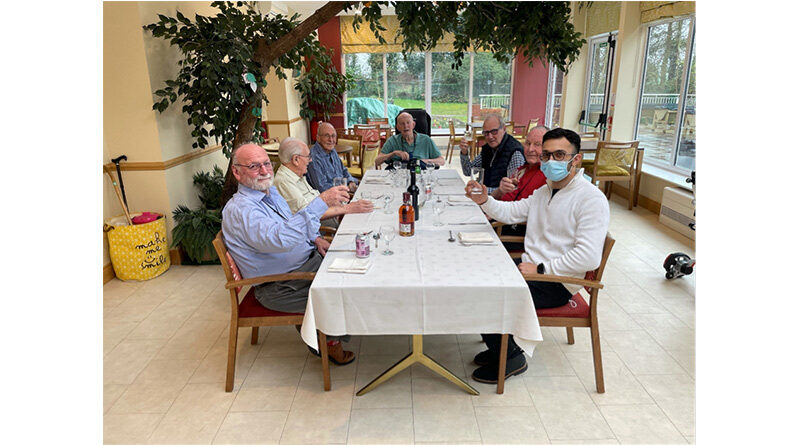 A Hertfordshire care home has launched a Gentlemen’s Lunch Club to provide a space for its male residents to come together and form new friendships – while enjoying a tipple or two.

Attended by six residents and a staff member at Foxholes Care Home, near Hitchin, the inaugural lunch event was hailed a great success, with one resident welling up after enjoying an afternoon of camaraderie with like-minded fellow residents.

Foxholes, a thriving and active care environment that promotes inclusivity, which is evident in its range of clubs and events for all residents, is always on the lookout to trial new initiatives that enhance resident wellbeing.

Following keen interest from a number of male residents to have a space where they could come together in the home, which has a 70/30 female to male ratio, the newly formed club was launched to provide them with a platform where they could discuss anything from their mental health to hobbies and interests, as well as shared experiences with other men over a two-hour lunch.

The residential home’s head chef, Manuel Tovar Angulo, provided the club members with bespoke dishes of Cajun chicken and vegetable curry to alongside a selection of beers and single malt whiskies.

One of the key themes of the new weekly event, which took place in Foxholes’ orangery overlooking sprawling countryside, was discovering talents amongst the members, which revealed a former poet who agreed to write a poem to share at a future event. While another club member, a former musician, said he would bring in his guitar to play at future lunches.

Neil Gandecha, Estate Manager at Foxholes, who also attended the club’s launch event, said: “We’re always open to new ideas on ways we can improve our residents’ quality of life and with several men reporting that they’d like to have a little space to gather and share their thoughts and experiences, we decided to trial the lunch club. It was a way of providing somewhere where they could form new friendships and share like-minded interests, whether it’s sport, cooking or favourite destinations, and I think it’s really benefitted them from a mental health stance.”

He continued: “One resident was tearing up after our first event. He would often sit in his room and watch sport on TV but after finding out that others shared his sporting interests, they all plan to watch future events together in the lounge, and that’s what the club is all about; promoting companionship and fostering new friendships. Whilst all residents interact, in an environment that’s predominantly female, we realised there were some differences in interests and preferred activities, and the lunch club is just a way of trying to strike the right balance. We’re really pleased it’s gone down so well with residents.”

89-year-old resident Roy Purton, said: “I thought the lunch was fantastic and it was a pleasure to meet with other like-minded men to discuss a variety of topics and talents. While fellow resident 96-year-old Bryan Orchard, added: “The food was excellent, and the company was even better. I can’t wait for the next one!”

After the success of the first event, the club is expected to grow in attendance week on week, with future events set to incorporate the local Hitchin community.

Neil said: “We’ve already reached out to the local Hitchin Priory Probus Club and plan to get in contact with the Rotary Club of Hitchin Priory to explore opportunities to collaborate in the near future. We also plan to expand to include the family members of residents who wish to join the fun.

“When the pandemic subsides, we’d love to take the club on the road and have days out on walks or at the golf range. In fact, we already have future plans to launch other clubs such as birdwatching, indoor bowls, and healthy juicing. If the demand is there, we’ll aspire to fulfil it – the possibilities are endless!”