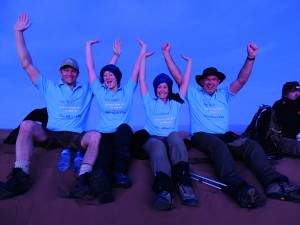 Care Provider, Hartford Care announces that it has raised over £30,000 for The Silver Line.

The Silver Line helpline was founded by Esther Rantzen CBE in 2013 to provide advice, information and friendship to isolated and vulnerable older people across the UK. The team at Hartford Care recognised that the objectives of the new charity corresponded perfectly with their own core values of providing Care, Comfort and Companionship for older people, so they decided to nominate it as the Group’s “Charity of the Year” 2014.

The Group’s initial target was to raise £10,000 for the charity so, naturally, the team were absolutely delighted when the final total reached just over £30,000. This amazing achievement came about through the efforts of many Hartford Care employees, residents and family carers organising and taking part in a wonderful range of events including a Big Chat Challenge, washing cars, sky diving, cream teas, fetes and fairs around the Group’s ten care homes, an auction night, car boot sales and much more.

There are however, four people that deserve an extra special mention: Sean and Jo Gavin (Hartford Care’s CEO and Brand Director respectively), Leah-Marie Mills (Group HR Manager) and Mike Smith (Operations Director) – otherwise known as the Hartford Care Sahara Trek Team! Through their dedication and exceptional personal effort they managed to secure a significant proportion of the total raised by gaining sponsorship for a personal endurance test that they decided to embark upon in the Sahara Desert.

From 13th to 18th November 2014, the Trek Team braved high temperatures and took on the tough challenge of trekking across the Sahara Desert. Their challenge was to trek for four days through the ever-changing landscape of the Sahara and to climb to the top of the massive Chigaga Dunes. The days were hot, and the trekking was tough, but all four members of the team completed the challenge! Upon their return they described the experience as “brutal at times, but exhilarating.”

Sean Gavin, CEO of Hartford Care explained: “This was a great thing for us to do and, although it was a challenge, it was also hugely enjoyable and rewarding and I feel really privileged to have had the experience. I won’t say it was life changing but it may have been – apart from anything else it taught me that no matter how tough something is, you probably can do it. I was particularly touched by the generosity and support of the many, many people both within and outside the Group, who supported us either with their time, their creativity or financially. For Hartford Care to have raised over £30,000 to, hopefully, make a great difference to many vulnerable and lonely people, particularly at this time of year, was something of which we were all really proud of and I thank everyone who supported us.”

The Trek Team were invited to present the cheque for the total raised, to Esther Rantzen and Sophie Andrews (The Silver Line’s CEO) in person, at The Silver Line’s first birthday celebration at the end of November.

Since their return from the desert, the Trek Team have often been asked to share the details of their ‘once in a lifetime’ experience, so Jo Gavin has written a blog to do just that! You can read Jo’s blog at www.hartfordcare.co.uk/news/memories-of-the-sahara-trek

For further information about The Silver Line please visit: www.thesilverline.org.uk/about-the-silver-line