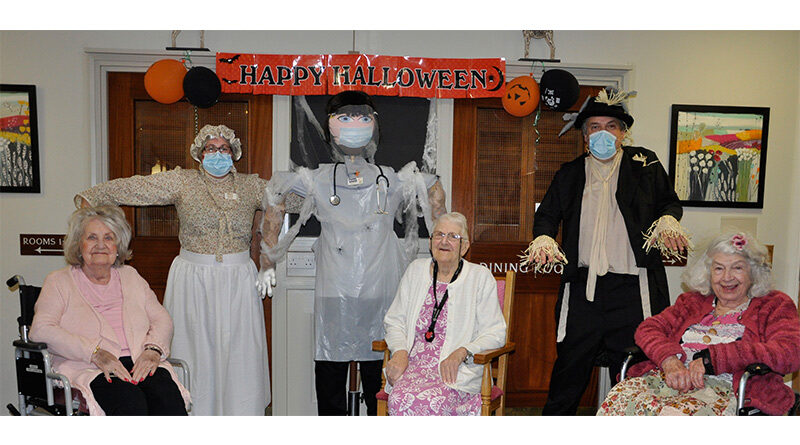 Residents at 21 care homes across the south have proved outstanding in their field by staging a fun contest to make the best scarecrow.

Handicrafts were the order of the day as carefully constructed, imaginatively designed creations came to life at Colten Care homes in Dorset, Hampshire, Wiltshire and Sussex.

Judges declared her the winner after being impressed by her carefully constructed outfit, array of cooking utensils and the thinking behind her.

Chris Dimmick, Companionship Team Leader at the Outstanding-rated home, said: “Hazel Nut was a great choice as baking and cooking are popular activities at Linden House.

“They prompt residents living with dementia to reminiscence about favourite recipes, share them with each other, and compare traditional and modern techniques.”

Runner-up in the competition was an afternoon tea-themed scarecrow scene on display in the garden Tea House at Braemar Lodge in Salisbury.

In third place was a Mary Poppins scarecrow made at Wellington Grange in Chichester.

At Avon Cliff in Bournemouth, residents unveiled ‘Poppy the PPE Nurse’, a tribute to nurses working at care homes and hospitals in the frontline of the fight against Covid.

Complete with facemask, apron, gloves, shoebags and stethoscope, Poppy was given pride of place in the home’s foyer.

Among her first visitors were a couple of ‘TV scarecrow celebrities’: Worzel Gummidge and his love interest Aunt Sally, aka Brian Knight and Sharon Surgeon from the home’s Companionship Team.

Sharon said: “The residents wanted to honour Covid nurses wherever they work. They had so much fun making Poppy. Worzel and I thought she deserved a visit from us as an official scarecrow ‘seal of approval’!”

Sylvia Williams, who rolled up and sewed paper inside Poppy’s limbs, said: “Everyone joined in with the fun of making her. She’s very good, doesn’t say a word.”

Other homes revealed their scarecrows at afternoon teas and Halloween celebrations.

At St Catherines View in Winchester, ‘Farmer Giles and his wife’ took up positions in the garden around the home’s red tractor while children at the local Tops day nursery made a toddler scarecrow as part of the home’s entry.

At the entrance to Abbey View in Sherborne, ‘The Green Man’ is sharing his legendary message of rebirth and new growth.

Residents such as Sheila Sanders and Yvonne Willway spent more than a month painting designs onto fabric, cutting out leaves for his cape, plaiting wool for his beard and covering the home’s lounge in hay when it was time to assemble him.

Abbey View has also been displaying child-sized scarecrows made by Sherborne School for Girls, Sherborne Primary School and the Little Gryphons toddler group.

To complete their entries, homes took and sent in photos of their scarecrows to Colten Care’s head office where members of the Operations Team formed a judging panel.

Operations Director Elaine Farrer said: “Our friendly scarecrow competition is an annual fixture on our calendar and is always hugely enjoyable. Residents have a great time designing and preparing their entries. It’s also an opportunity to retain links with friends and contacts in the community.

“Huge congratulations to Linden House on their win. It’s never an easy task to pick a winner but the main thing is that it is a lovely fun way to share in a project and keep up those handicraft skills.”