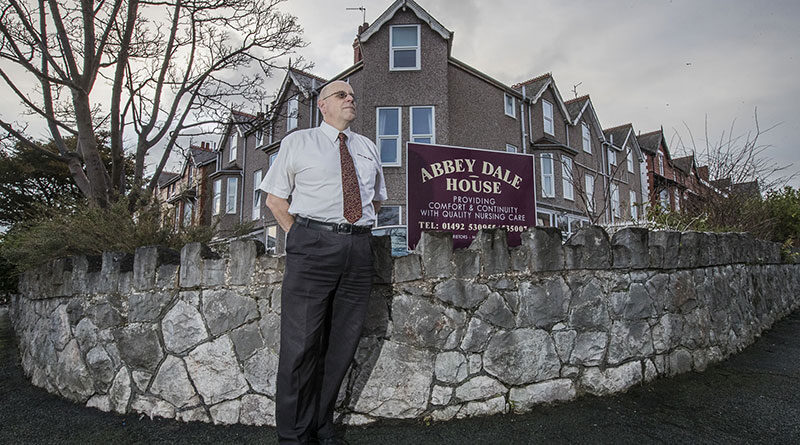 Vulnerable care home residents are being treated “like second class citizens” by councils thanks to a growing North-South divide.

An investigation by Care Forum Wales (CFW) has revealed that the fees paid by local authorities in the North are up to £11,000 a year less per person than those on offer from their counterparts in South Wales.

They say the issue was brought into sharp focus when Torfaen Council announced big increases in their rates – 17 per cent for residential care and 25 per cent for nursing care.

It means that a 50-bed care home in Torfaen will receive £546,000 a year more for providing residential EMI care than a similar sized home in Anglesey, Wrexham and Flintshire for exactly the same levels of care.

According to Care Forum Wales chair Mario Kreft MBE, it’s adding insult to injury at a time when care homes across Wales are being forced to close because chronic underfunding has made them “unviable”.

This comes at a time when local authorities in Wales have received an additional £36.5 million to meet the extra costs of paying staff the Real Living Wage of £9.90 an hour.

Overall, there has been an overall rise of 9.4 % in local authority funding but the increases in fee levels have almost all been lower, at 6-7.5%.

It was clear that local authorities in North Wales were choosing not to pass on the extra funding to the front line of social care.

As a result, there was “growing chasm” between the fees paid by councils in the north compared to the majority of authorities in South Wales.

He said: “The North-South divide is essentially treating our beloved care home residents – who are by and large extremely frail and vulnerable – like second class citizens.

“It is neither fair nor is it kind. The people making these decisions should take a long look at themselves.

“It’s also a kick in the teeth for our magnificent staff who have been utterly heroic and put their lives on the line during the pandemic to protect the people for whom they provide care.

“I have said in the past that channelling funding through local authorities without clear conditions was like putting a fox in charge of the hen house and what’s happening now is doing nothing to disabuse me of that notion.

“Everyone is blaming the Welsh Government but they have come good with extra funding.

“Councils have been given more money to cover the additional costs of implementing the Real Living Wage but the increases we’re seeing in North Wales are generally around six or seven per cent.

“North Wales used to be the top of the league in terms of care home fees and now we are in the relegation zone.

“Fees are unsustainable at this level and something has got to give. In many cases, the extra financial burden will fall on hard-up families to make up the difference.”

Clive Nadin, owner and registered manager of Abbey Dale House care home in Colwyn Bay, said:
“It’s disgraceful and very unfair. In calculating the fees in Conwy they haven’t taken into account all our costs which is what Torfaen must have done.

“All local authorities have had more money to pay for the extra costs of the Real Living Wage.

“All of our costs are going up and we just don’t have a clue how high they are going to go which is creating a lot of uncertainty.

“It is a very worrying time and the viability of all homes is at risk to be honest
“A care home located around 200 yards from us called Guys Cliffe has just closed.

“If we have more care home closures, we are going to end up with people stranded and nowhere to go.”

Kim Ombler, a director and registered manager of the Glan Rhos Nursing Home at Brynsiencyn, Anglesey, is one of a number of rebels refusing to accept the “ruinously low” rates.

She said: “We are not going to accept the rates set by Anglesey and Gwynedd Councils and we have written to them to tell them that. What we need as a bare minimum is lower than they pay themselves for looking after residents.

“This year we are taking a stand and telling them we are not going to accept it.
“We have been paying the Real Living Wage since last the end year but the cost of living is going up as well.

“As a result, we are still losing staff to Ysbyty Gwynedd, the bank and childcare.
“We are losing people from the sector because they have had enough after the nightmare of the past two years.

“We are now looking to recruit staff from abroad again which is something we have done once before.

“Something has got to give. If we accept the rates the councils are offering it’s not going to help in terms of our viability.

“If the fees are not set a realistic rate there won’t be any care homes left. We have to make a stand now and if everybody does the same thing they will have to listen.”
According to Bethan Mascarenhas, who runs The Old Vicarage care home in Llangollen, most care homes were at breaking point.

She said: “You have look at the impact on residents and what you can do with £10,000 more a year.

“We have 17 beds so it would be a huge amount – £170,000 more a year for us to do all sorts, including better equipment, better activities and paying our team better.

“It like councils are turning care homes in North Wales into areas of deprivation.
“It’s really demoralising. We’re in an impossible situation and as a care provider I don’t have a quality of life.

“I’ve struggled over the last two years and buck stops with you. We’re all exhausted and I’ve not taken a holiday in two years because I don’t want to leave my team.

“Like any business, unless you have the finances to back it up, especially when the kitemarking and the expectations are so high, there comes a breaking point and I think most homes are quite close to that.”

Ceri Roberts, managing director of Cariad Care Homes which runs the Plas Gwyn Home in Criccieth and the Bodawen home in Porthmadog, said:

“This is absolutely disgraceful.

“How on earth can they justify that vulnerable people are valued far less than somebody in South Wales and why should we effectively have to subsidise councils in North Wales?

“If I relocated our two homes, which can cater for up to 78 people, to Torfaen I would be in line to receive £770,000 than the fees being proposed by Gwynedd.

“I have written to Gwynedd Council to say that I cannot accept the fees that they are paying because it doesn’t cover the cost of care and I have informed them what we will be charging them this year.

“Our toolkit calculated the real cost of care per resident was around £960 a week and we are asking for considerably less, around £800.

“If we can maintain high occupancy at around 98 per cent – and it would be impossible to achieve more than that – we can just about afford to get by.

“When I shop at Tesco I don’t tell them at the till I can’t afford to pay the full price and that I am only prepared to pay a proportion of the total.

“They only look at how much they want to pay and then work backwards, totally ignoring what it actually costs to run a care home in the real world. They manipulate the toolkit to suit what they want to pay.

“Gwynedd Council will certainly be paying in excess of £800 per resident per week to their own homes, so they know the true cost of running a care home but they’re coming in way below that.

“The other thing that you need to remember is that the fees the council pay themselves don’t include a lot of the capital expenditure which we have to find from the fees we receive.”