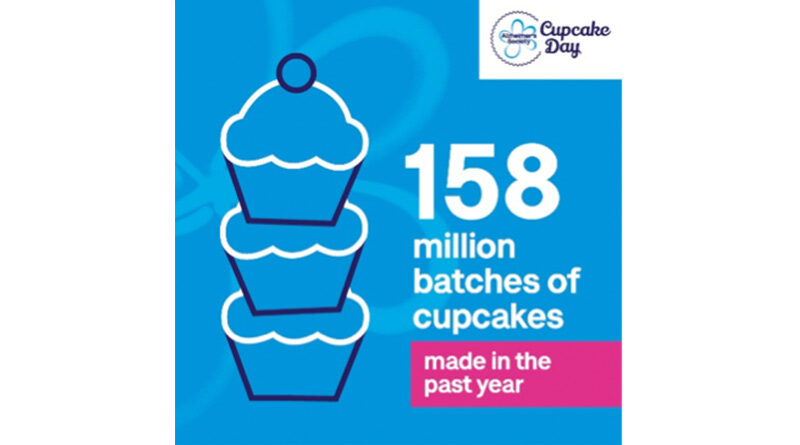 The nation’s newfound love for baking has been revealed, with new data from Alzheimer’s Society, ahead of the charity’s Cupcake Day on 17 June, revealing the UK population has whisked, stirred, and beaten a total of 822 million eggs and 128 tonnes of sugar, butter, and flour (42.5 tonnes of each ingredient) in the past 12 months.

The survey is supported by new shopper and market data from insight leaders IRI that shows a 15% increase in cake mixes sold, with over 300 million flying off the shelves in the last year alone.

Generation ‘Z’ (16–24-year-olds) is front and centre of the baking boom, spending an average of over 5.5 hours a month in the kitchen since the beginning of March 2020, around two hours more than before March 2020. In the past year, data funded thanks to players of People’s Postcode Lottery showed:

Celebrity Chef Rosemary Shrager said: “Seeing so many of the younger generation pick up baking is so lovely. Baking can do so much good for the soul, and the stomach, it’s wonderful to know so many of us have turned this past year into something positive by dusting off our aprons and whipping out our whisks. I’m looking forward to seeing a feast-worthy spread of lovely new recipes this Alzheimer’s Society Cupcake Day, and it couldn’t be for a better cause. Coronavirus has hit people with dementia the hardest – anything you can do to help raise some badly-needed funds will make a difference.”

Although the younger generation has left no speckled banana unbaked, as a nation, 38 million have turned their hand to baking in the last year, with over a fifth (22%) baking a cake for the first time. In the past 12 months, the UK population has baked an estimated 158 million batches of cupcakes and 126 million cakes.

People who have used baking paper have gone through an average of 4m of the baking staple in the last year. The combined length of baking paper used in the UK totals an estimated 95,000 miles, which could go around the earth8 times.

Brits have spent an average of over £8.4 billion over the past year on baking essentials and items, with just under three in ten (29%) spending money to swot up on baking advice, like cookbooks, subscriptions, and tutorials. Nearly a fifth of respondents (18%) also admitted to spending over £9 on ingredients for one standard size cake, the equivalent of a sixth (16%) of the average cost of a weekly family food shop. In the past 12 months, the average budding baker spent £44 on cake tins and dishes, £52.50 on cake stands, £52 on aprons and £57 on baking advice.

New sales data from IRI supports this with its latest figures into the nations shopping habits. In the past year, the UK has spent close to £1 billion on eggs, almost £500 million on cake mixes and a staggering £1.3 billion on butter.

Jaime Silvester, Head of Retail at IRI UK said: “We have already seen in the last year that for many, commuting has been replaced with cooking. With more time at home together, it seems that baking has become both a family activity and a way to entertain the children.

“The home baking category saw significant growth in line with lockdowns and especially among families with either babies or teens. As society reopens and we move to a more ‘normal’ way of life, the temporary enthusiasm for home baking appears to have waned, but when the novelty of getting out wears off, we may be tempted back to baking again.” (IRI Shopper Insight)”

With over a third (35%) of respondents agreeing that their baking skills have significantly improved and nearly half (46%) agreeing to continue baking as much as they do now in the future, Alzheimer’s Society is calling on first time give-it-a-goers and proud professionals to keep the baking craze alive by taking part in Cupcake Day, to raise funds for people affected by dementia, hit hardest by coronavirus.

Over a quarter of all Covid-19 deaths in the UK have been people living with dementia, thousands have faced an increase in symptoms because of social isolation and it has been a heart-breaking time for families, who have either been cut off from loved ones or faced a lack of any break from caring duties. It has never been more important for the 38 million bakers and the millions more cake lovers to get involved.

People can take part in several ways, from organising a delivery ‘drop off’ of goodies to your neighbours, hosting a driveway bake sale in your area or having a socially distanced cupcake party in your garden with friends and family.

“We must never forget the grave impact the pandemic has had on people affected by dementia. But as we finally see a way through, and with so many people developing a love for baking over the past year, we are calling for bakers to unite and put their newly found baking skills to good use. By getting involved in Cupcake Day, you will be helping us reach even more people through our vital services, who urgently need our support.”

Money raised will go towards Alzheimer’s Society’s vital support services, which are also funded thanks to People’s Postcode Lottery. The charity’s services, like its Dementia Connect support line have been used over five million times since March 2020 and have been a lifeline to thousands.

To sign up and find out more please visit – alzheimers.org.uk/cupcake-day