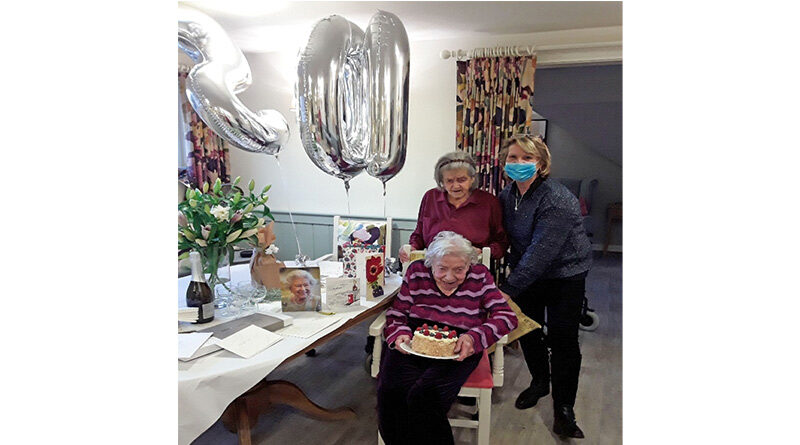 A former nursery nurse from Lymington has celebrated her 105th birthday at a care home in the town.

Madeline Gates, née Elgar, had a successful career as a Norland Nanny, the name given to graduates of the prestigious early years training provider, Norland College.

She now lives at Colten Care’s Belmore Lodge where team members and friends helped her enjoy her special celebration.

When Madeline was born in Lymington in December 1916, the First World War was only halfway through, horse-drawn carriages and delivery carts remained a common site in the streets and most British homes were still lit by gas.

The young Madeline was sent to boarding school to encourage her to become independent.

After completing her Norland training, she not only provided childcare herself but later took on the responsibility of training future nannies and nurses, some of whom remain good friends to her and are regularly in contact.

On her return to Lymington after college, Madeline married and lived in the town’s Rookes Lane and then Hamilton Place where she celebrated her 100th birthday before moving to Belmore Lodge.

She was a keen sailor along with both her husband and Peter Elgar, her younger brother who she treasured until his passing just over a year ago.

Madeline was also seen regularly in Lymington riding her bicycle. She only gave up cycling after she fell off and broke a hip at the age of 98.

Asked for her secret of longevity, Madeline said: “The key to a long life is keeping quiet and out of the way. The occasional tot of whisky or gin may help as well.”

Joining her for the birthday celebration were friends Sandra Glandwell and Mary Malcolm, a fellow Belmore Lodge resident.

Sharon Semple, the home’s Companionship Team leader, said: “Madeline had a nice afternoon and was particularly impressed with the card from Her Majesty.

“She wondered if she made it to 110 whether or not the Queen would visit for a party.”

Madeline is one of several Belmore Lodge residents who had birthdays of 100 years or more during 2021, and remarkably she is not the oldest of them. In May, fellow resident Mabel Looker celebrated her 106th.