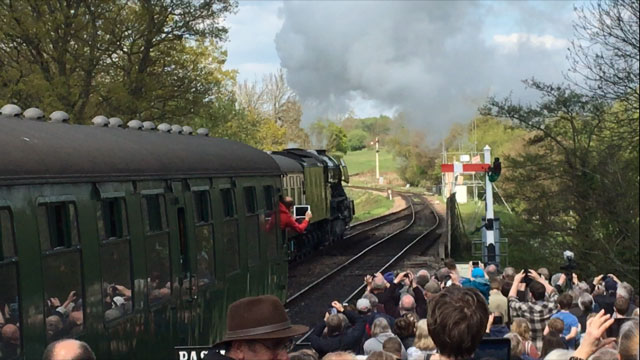 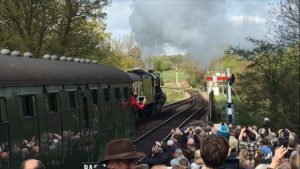 Having travelled on the train as a child in Scotland as part of a school trip when she was 8 years old, and watched it leave from Edinburgh’s Waverley Station on numerous occasions before the Second World War, Janice was taken on a trip by Sunrise staff to visit the Flying Scotsman on the Bluebell Railway.

The train was the first steam locomotive to reach 100mph in the 1930s, and set the record for the longest non-stop journey by a steam locomotive in Australia in 1988. It has only recently been made accessible to the public again, having been restored by engineers at the National Railway Museum. 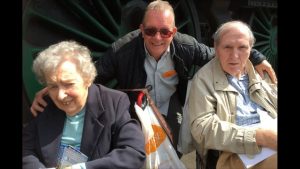 Janice was accompanied on the trip by fellow train enthusiast Robin Fryer, and both residents were given the opportunity to experience the sights, sounds and smells of a British national treasure.

Janice and Robin were even given VIP access to the Guard’s Carriage on another steam train from Horsted Keynes to Sheffield Park, allowing them to ask questions to the Guardsman and learn more about the train’s history.

The trip was organised by the Memory Care team at Sunrise of Eastbourne, who provide specialist dementia services to residents with a range of individual needs.

Sunrise communities up and down the country are committed to ensuring an active, fulfilling lifestyle for their residents, with outdoor trips offering a vital opportunity to pursue interests while bringing back memories of past experiences.

“Janice was absolutely thrilled to see the Flying Scotsman once again. She has been fondly reminiscing about her memories of the train in Scotland, so we were delighted when the opportunity arose to pay the train a visit on the Bluebell railway.

“Neither Janice nor Robin could believe it when our minibus parked up right outside a Victorian railway station in the Sussex countryside, with the iconic Flying Scotsman standing in front of their eyes.

“Outdoor trips are a crucial way through which residents can engage with their past personalities and experiences, and, with framed photographs in hand, Janice and Robin will not forget this day for a long time to come!”