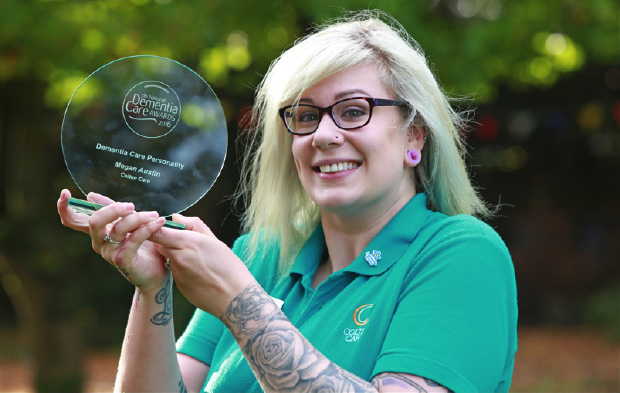 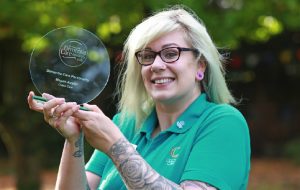 A carer at a family-owned Dorset dementia home has won two coveted awards in the space of a week.

Meg Austin, a Healthcare Assistant at The Aldbury in Parkstone, Poole, has been named Care Personality of the Year at the National Dementia Care Awards.

Nominated by colleagues at Colten Care and residents’ relatives, she was presented with her award by astrologer, broadcaster and author Russell Grant at a gala ceremony at the Brighton Centre.

“I really did not expect my name to be called out,” said Meg, 29. “Then I saw my picture on the stage. Everyone stood up and I was still sitting down. I had a delayed response. When I walked up to the stage, Russell Grant said: ‘You look really shell-shocked’. I said: ‘I am’.”

The award recognises active promotion of excellence in care, peace of mind for relatives and a happy working environment. It is made to “someone whose personality and energy has made a difference in ways that are truly inspiring and memorable.”

In their citation, judges said Meg demonstrates “exceptional warmth and consideration for people living with dementia. She inspires others around her by drawing on her own personal attributes and values. Meg appreciates every worker’s contribution to delivering outstanding dementia care.”

Just a few days later, Meg was in Bristol to hear she had won the Dignity in Care Award for the south west region at the Great British Care Awards.

The criterion there was to “demonstrate the significance of maximising client independence and choice, whilst respecting and maintaining privacy and dignity at all times.”

Meg started at The Aldbury as a carer in 2010 and has expanded her responsibilities with team leading, training and a one-to-one resident companion role.

With Colten Care’s support, she is now in the final year of a Southampton University degree combining general and mental health nursing.

Meg, who lives in West Moors, said: “I chose the combination because it’s ideal for focusing on dementia care. I am passionate that people with dementia are treated as they should be, compassionately and holistically. I really push that approach at The Aldbury and help others in the home to follow it too.”

Alan Icely-Brown, Home Manager at The Aldbury, said: “Huge congratulations to Meg for gaining much deserved recognition through these separate awards. She is a pleasure to work with and is totally focused on ensuring our home is a happy, successful care setting.”