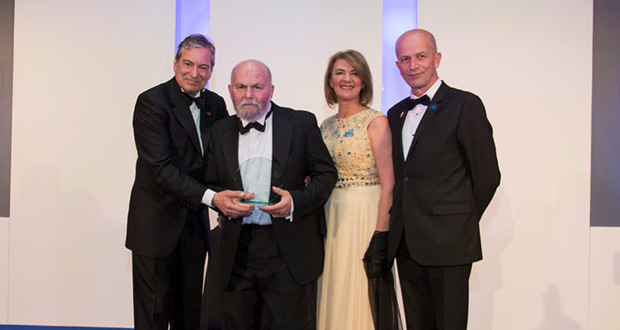 A resident at Bilney Hall care home near Dereham is today celebrating after being presented with the ‘Best Resident Contribution’ award at the National Dementia Care Awards 2017 at a glittering ceremony on Friday evening.

Despite living with dementia, 71-year old Graham Mason contributes towards daily life at the home, and has been recognised at the national awards for his energy and contribution.   Graham, who is originally from Lyng, moved to the home in November 2016 and has made a real impact on the lives of residents and staff ever since.
Graham lives with vascular dementia and suffers from left-side weakness.  Despite living with the challenges dementia poses, and being in receipt of daily care himself, he goes out of his way to help those around him.

Graham is often found ‘at work’ in the home in his high-vis jacket.  More recently, he has been involved with helping create the home’s brand new Sensory Garden, which was officially opened this summer to mark Bilney Hall’s 150th anniversary.

Graham takes great pride in helping to look after the gardens, assisting with the upkeep, getting involved in everything from weeding, ‘dead-heading’, re-planting, and pruning, to watering flowers.

He is also a keen member of the home’s bird club and ensures that the bird feeders around the grounds are replenished every day.
Since coming to live at Bilney Hall, Graham says he has re-gained his confidence and self-respect, and has transformed into a happy character who has become a central part of life at Bilney Hall.

Home Manager Jenny Daynes said: “We are so proud that Graham has won this award and is receiving the recognition he deserves.  He really supports the home in many ways.  The help he provided in with the sensory garden has been amazing.  He also has a great ability to calmly sit and talk with other residents and put those at ease who may be feeling anxious or confused.

“Graham really enjoys being part of the running of the home and is an active member of our residents’ forum. He even joins in the recruitment process, and participates in interviews, often putting candidates at ease through his friendly demeanour.  He asks relevant questions, speaking about people with dementia and giving examples.”

Concludes Jenny; “Since he came to Bilney Hall, the change we have seen in Graham is really quite remarkable and we would like to publically thank him for the contribution he makes to life here at Bilney Hall, and congratulate him on receiving the recognition he deserves from the judges of the National Dementia Care Awards.”

Graham says: “I do what I do at Bilney Hall because it’s my home and I want to play my part. Before having a stroke, I served on the Lyng Parish Council; I’m used to being busy and so I do what I can to help at Bilney.”