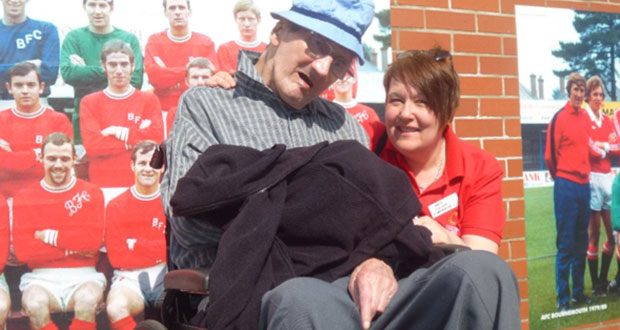 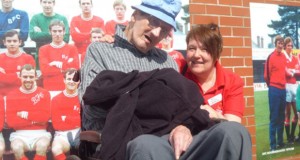 A family-owned Dorset care home teamed up with two Premiership football clubs to enable a 90-year-old fan with dementia to attend their match as a birthday surprise.

Stanley Pride, a lifelong supporter of West Bromwich Albion, joined the away crowd at AFC Bournemouth’s Vitality Stadium for the penultimate game of the season, a 1:1 draw.

The trip to see Stanley’s beloved ‘Baggies’ in action was a birthday gift from staff at his care home, Fernhill in Longham.

He was accompanied by two Colten Care staff, Kate Morris and Hayden Harris, after arrangements were discussed and agreed in advance with both West Brom and Cherries officials.

Kate said: “Stanley had a big smile on his face when he arrived at the ground. He appeared delighted to have been taken to see the match on what was a beautiful, sunny day.”

Fernhill Activities Organiser Karen Grant-A’Court added: “We knew just how much seeing West Brom play would mean to Stanley and we were only too pleased to go the extra mile for him and create a real quality of life experience for him.

“Despite the fact that he lives with dementia, he was able to express how happy he was to be back watching football. It was quite an achievement for him to go out and enjoy the afternoon.”

Born in Birmingham in 1926, Stanley met his wife Irene while training at Bovington army camp. The couple moved to Poole after the war but Stanley always remained a fan of West Brom, the team he supported as a child.

Karen said: “We would like to thank AFC Bournemouth and West Bromwich Albion, especially ticket managers Jo Bar and Liz Finney, for working with us to make Stanley’s matchday experience possible.  The stewards at the ground were also amazing and helpful on the day.”