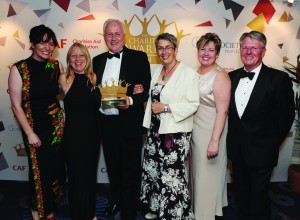 Alzheimer’s & Dementia Support Services, a charity that improves the lives of people with dementia in Kent, has won the Social Care and Welfare category in the prestigious Charity Awards 2014 for an innovative hospital-based Dementia Buddy Scheme.

The project recruits and trains volunteers to support patients in hospital who have dementia, relieving anxiety and distress by enabling patients to join in activities including  reading, dancing, singing, walking, chatting and playing board games. The Dementia Buddies help to ensure patients eat and drink enough and they provide a vital communication link between patients, staff and family members. Hospital staff report that this reduces work pressures and improves the atmosphere on the ward. The Dementia Buddy Scheme helps to tackle factors that lead to poor outcomes often experienced people with dementia in hospitals.

Alzheimer’s and Dementia Support Services piloted the scheme at Darent Valley Hospital in Dartford with funding from Kent County Council in 2012/3 and it was so successful it then secured funding from the Dementia Challenge Fund and has been commissioned by Medway NHS Foundation Trust and Maidstone and Tunbridge Wells NHS Trust.

In choosing Alzheimer’s & Dementia Support Services ahead of charities from all around the UK, Charity Awards judge Sir Christopher Kelly applauded the “simplicity” of the concept which tackled a “very real issue” and declared the scheme was “properly evaluated and capable of being rolled out by others”.

Liz Jewell, CEO of Alzheimer’s & Dementia Support Services, which is based in Northfleet, said: “We are delighted. We are always looking for new ways to meet the changing needs of our clients and the Dementia Buddy Scheme seemed an obvious way to help those who are at their most vulnerable.  By putting our learning from hospitals in Kent into a toolkit, we want to share good practice to help people with dementia all over the UK.”

The framework developed during the pilot between the charity, the county council and Darent Valley Hospital can now be replicated in any hospital. Alzheimer’s & Dementia Support Services plans to make a blueprint for the Dementia Buddy Scheme available for others to download from the internet, as well as adding a number of support packages for a fee which will generate income for the charity.

The Charity Awards are organised by Civil Society Media and they are now in their 15th year. Awards are presented in 10 categories with a panel of sector leaders judging each winning charity to have shown outstanding best practice from which other organisations can learn.