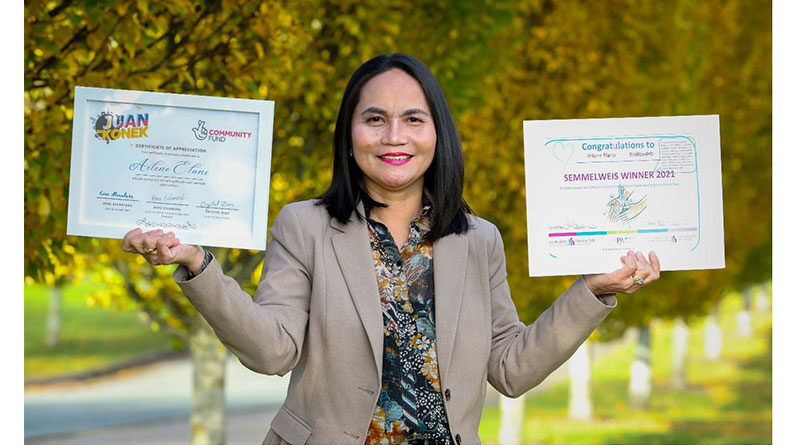 A “coronavirus warrior” who appeared in a hard-hitting TV documentary about the pandemic has been honoured by the Philippines ambassador to Britain.

She was astounded to find herself having lunch with the top Philippines diplomat in Britain, Antonio M Lagdameo after a London VIP screening of the documentary in which she featured.

The in-depth two-hour film, Kontra Corona, focuses on huge challenges faced by expatriate Filipino frontliners in Europe and their families during the peak of the first wave of the pandemic.

Arlene, 49, was interviewed by the documentary makers who filmed her outside Bodlondeb centre of excellence for dementia and mental health care. They showed how she and fellow staff, including numerous colleagues from the Philippines, worked tirelessly to protect residents.

Arlene was among Filipino health sector workers from across Wales and England invited to attend the exclusive screening headed by Rose Eclarinal, who executive produced and presented the film.

She was introduced to the Filipino ambassador who congratulated her for doing the Filipino community in the UK proud. She was also presented with a commemorative certificate.

Arlene said: “I had not realised we would be meeting such top dignitaries. I thought we were just going to watch the film so I was completely unprepared for anything else. It was such a surprise to discover we would be having lunch with the ambassador. I felt so honoured.”

The celebratory occasion coincided with a second achievement for Arlene who has also been jointly awarded a 2021 Semmelweis accolade by Pendine Park care organisation in recognition of her exceptionally high standards of hygiene.

In the documentary Bodlondeb is highlighted for its remarkable work. Arlene describes to the interviewer how one of the first measures introduced at Bodlondeb was to install external hand-washing facilities to ensure everybody would wash their hands prior to entering the homes.

She said: “This was in place before we were instructed to do so by the Government.”

Holding high her two awards certificates, she said they are a tribute to all her colleagues who have worked selflessly and courageously through the pandemic.

She said: “I will dedicate these two awards to the whole team of Bodlondeb and the Pendine Park care organisation. They are part of the process, and together as a team we deliver quality care, we follow our training and embrace every new day as an opportunity to better the provision of care for our residents.

“The team around me have been determinedly fighting a war against the invisible enemy during the height of the Covid pandemic.

“Our manager Ann Chapman continuously supports us and encourages us to put all our heads together and decide how any helpful ideas that protect us all can be implemented.”