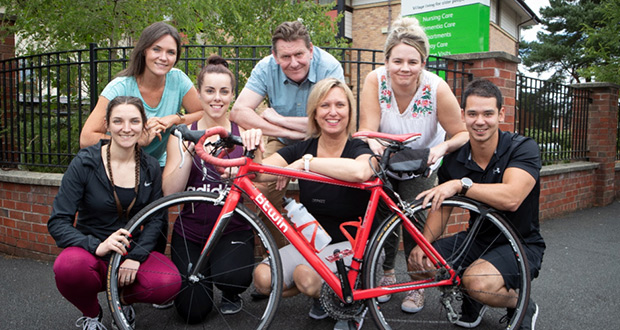 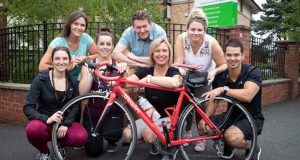 Riding on the success of British cyclists in this year’s European tours, an intrepid group of staff from a specialist dementia care village operator in Cheshire are channelling their bulldog spirit into a coast to coast challenge, cycling a gruelling 140 miles over four days with the aim of raising over £1000 to support activities for care village residents.

Barbara Tait (42), Lewis Newstead (24), Sian Ryland (26), Katie Walker (25), Peter McNicholas (54), and Debbie Quinn (57) are all members of staff from Belong care villages in Macclesfield and Warrington who are participating in the challenge, as well as Debbie’s 15-year old son, Kieran. The group will set off on Thursday 4th October at 9am from Earl’s Road, Whitehaven and travel from the west to the east coast of England, arriving at Tynemouth Castle, Tynemouth by approximately 1pm on Sunday 7th. With overnight stops planned along the way in Penrith, Alston, and Saint John’s Chapel, the group will cycle 30-35 miles for 4-5 hours each day until they reach their destination, which will involve a tough climb over the Pennines.

Family members and colleagues from the care villages will be there to assist and cheer the travellers on along the journey, driving between locations with food, clothes, and equipment before greeting them at the finish line.

Lead exercise instructor at Belong Macclesfield and driving force behind Belong’s participation in the challenge, Barbara Tait, said: “We’re very excited to take on the coast to coast challenge, especially for such a good cause. Our team comprises a mixture of Belong roles – fitness, administration and maintenance – within Macclesfield and Warrington care villages, and we’ve been training very hard for about six months, covering everything from short, fast cycles to longer, hilly rides. Fingers crossed the weather doesn’t add to the challenge!”

Matching the real-life efforts of the Belong cycle team, residents from all seven Belong care villages in north-west England will take part in a cycle marathon fundraiser of their own, where they too will cycle a collective total of 140 miles. The event will take place on 11th October and residents will use the bike and step machines in their respective Belong gyms to clock up the miles for charity.

Any members of the public willing to support the fundraising will be able to do so by dropping in to the  receptions at Belong Macclesfield and Warrington care villages, or by visiting the JustGiving page at:     https://www.justgiving.com/fundraising/belongmacclesfieldcyclechallenge2018