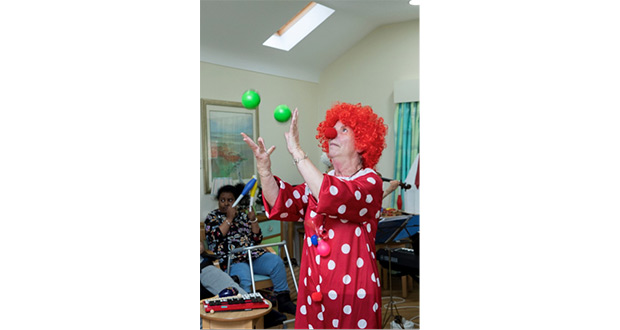 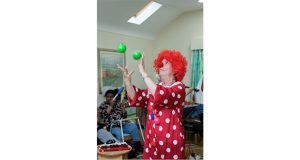 Musicians from a world famous orchestra brought the roar of the crowd and the smell of the grease paint to a care home as part  of a “magical” circus workshop.

Two members of Manchester’s acclaimed Hallé orchestra brought the joyous sounds of the Big Top to Pendine Park in Wrexham, engaging residents in a magical melee of entertainment.

It was particularly appropriate because Mario Kreft MBE, the owner of Pendine Park, comes from a circus family.

Maths whizz, Joan Hayes, aged 93 and almost blind, was among those who delighted in the circus themed extravaganza led by Hallé musicians David Petri on keyboard, and violinist Caroline Abbott.

Visually impaired Joan agreed to set the pace for one of the songs by tapping her feet in time to the music, encouraging everyone else to follow her rhythm.

Joan worked in the demanding world of book-keeping and accountancy for many years.

Despite her deteriorating eyesight the perceptive nonagenarian said she found the circus workshop inspirational.

She added: “It’s a great way to lift the spirits and encourage a good mood vibe.

“I’m struggling to see the detail of the costumes and individual actions of some of the performers but I can certainly make out the bright colours and, of course, the vibrant beat of the music is easy to follow. It’s been lovely joining in with everyone.”

The two-hour circus themed event was the culmination of an arts and music project held over the last year at Pendine Park’s Highfield care home.

Residents played an array of percussion instruments including maracas, castanets, finger symbols, hand drums and wooden blocks to accompany David and Caroline in cheery numbers ranging from That’s Entertainment to The Hornpiper and Those Magnificent Men in their Flying Machines.

Pendine Park enrichment and activities co-ordinators Chris Lewis and Elaine Lee donned circus themed costumes specially for the day. Chris transformed herself into Coco the Clown, complete with bright red curly wig and comical red nose. Elaine dressed up in red and black top and tails as a circus ringmaster. She had everyone on the edge of their seats as she realistically mimed a tightrope act. Juggling and plate-spinning sessions also kept residents highly entertained.

An unmissable display of a model Big Top added to the carnival capers. The show-stopping creation was carefully constructed by residents at circus themed craft sessions during the year.

The award-winning partnership between Pendine Park and the Hallé orchestra is designed to offer innovative musical therapy to care home residents and has now been running successfully for more than ten years.

David said: “We’ve been visiting here for a decade and we’re always given a fantastic welcome. I’ve come to know a number of residents quite well and it’s great to see how far they’ve progressed in their musical knowledge and inner confidence. There are some talented musicians and singers among the inhabitants here at Pendine Park which is a treat to see.”

Caroline added: “We travel over from Manchester especially for these workshops and it’s never a chore. It is so rewarding to see how much music inspires each of the participants and how they benefit in so many different ways from our sessions.”

She said: “We’re so lucky to have musicians of such high calibre here. The Hallé is one of the most famous symphony orchestras in the world and we are honoured to be able to work so closely with its professionals.

“I know all the residents who take part in these workshops have a wonderful time, not just via the musical education learning process, but in developing their social skills through music too. It really is such fantastic therapy and a joy to be a part of.”