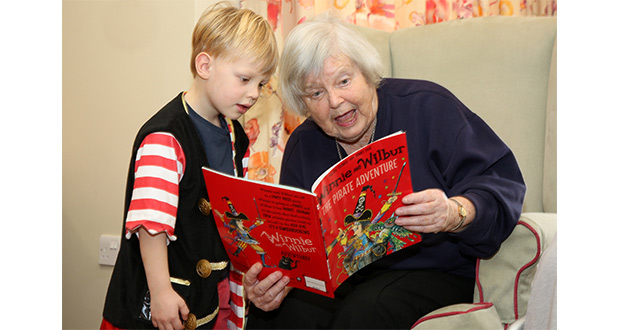 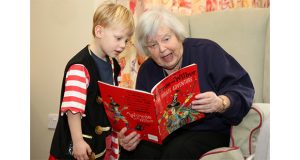 World Book Day gave residents at a Chichester nursing home the chance to share their love of reading with children from a nearby day nursery and primary school.

Colten Care’s Wellington Grange opened its doors to pre-school visitors from Co-operative Childcare based at the city’s St Richard’s Hospital, followed by a group from Oakwood School.

The children, dressed as book characters, were invited to join a reading circle and hear favourite passages read out loud by residents.

The occasion featured a presentation on the Duke of Wellington by 101-year-old Arthur Parr, a former Lieutenant Commander in the Royal Navy and a resident at Wellington Grange for the past 18 months.

Arthur said: “I was at a Trafalgar Day celebration at the home and wondered why Nelson was being remembered and not Wellington. I researched Wellington’s background and with the help of the excellent Companionship Team here, produced a short history of him so all the residents and staff can know about the person their home is named after.”

A poem on the theme of reconciliation was read out by Chloe Appleby in tribute to her friend and fellow Wellington Grange resident Dr Alan Russell who passed away earlier this year.

An author of two books, Dr Russell was the founder and honorary president of the Dresden Trust. This is a charity dedicated to healing the wounds of war and furthering harmonious relations between the people of Britain and the German city of Dresden, which sustained extensive allied bombing towards the end of the Second World War including the loss of its iconic central church, the Frauenkirche.

Also presenting was resident Maura Ward, who spoke on themes from the Bible.

Georgina Highfield of the Wellington Grange Companionship Team said: “Our residents and young visitors enjoyed all the presentations. Intergenerational activities like this are so valuable. Seeing our residents interact with children is such a joy. We had a day full of smiles and stories, and after listening to the speakers the children took the chance to socialise with the residents and play.”

World Book Day is an annual UNESCO-recognised celebration of reading held in more than 100 countries.