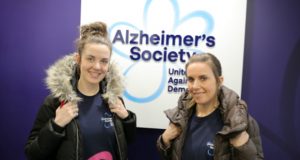 Two Alzheimer’s Society colleagues will push themselves to the limit when they embark on one of the world’s greatest treks.

Anna Ward and Hayley Woodyatt will swap heels for hiking boots on a sponsored trek to the iconic Everest Base Camp.

They hope their Himalayan hike will raise £20,000 to help Alzheimer’s Society find a dementia cure and provide vital support for people affected by the condition.

‘We will be walking in extreme conditions, at high altitude and will most likely return home two broken women.

‘But we’re ready to put ourselves through this because in the sixteen days it takes us to complete our trek, 7,680 people will develop dementia and there is currently no cure.’

Anna, who lives in Bexley, South East London, has been inspired to take part in the 115-kilometre walk after meeting people affected by dementia while working for Alzheimer’s Society over the last five years. She now manages the charity’s Will to Remember project which helps people affected by dementia create their own wills and they will by driving her on amid challenging Himalayan conditions.

‘Everest Base Camp is possibly the hardest fundraising challenge we could think of and are physically capable of, but I’m so looking forward to this challenge and no doubt those reminders of why I do what I do will come in useful on those harder days when the air is thin and I’m absolutely exhausted.’

For Hayley, a Will to Remember Executive who lives in York, the fight against dementia is a close to her heart as her maternal grandparents were living with vascular dementia when they died.

‘One of my saddest moments was hearing my granddad tell me about his granddaughter, Hayley, and pointing me out in a photograph. It was really tough watching my mum go through losing her parents to dementia and I wish now I’d known more about the condition so we could have made things easier for them.

‘This is why I am so determined our trek to Everest Base Camp will raise awareness of dementia and how Alzheimer’s Society can support more people affected by it. I wanted to take on a trek that would push me to my limits and earn our sponsorship  money in the toughest way.’

Alzheimer’s Society Chief Executive Jeremy Hughes paid tribute to his colleagues as they prepared to head off on their adventure this Saturday, 17 March.

‘Anna and Hayley typify the high level of motivation among staff and volunteers across Alzheimer’s Society to unite against dementia so we can find a cure and enable people to live life to the full after a diagnosis.

‘They are ready to go through the pain barrier to raise valuable funds for our charity. Dementia can devastate lives. We need attitudes like Anna and Hayley’s to help us win our fight against dementia.’