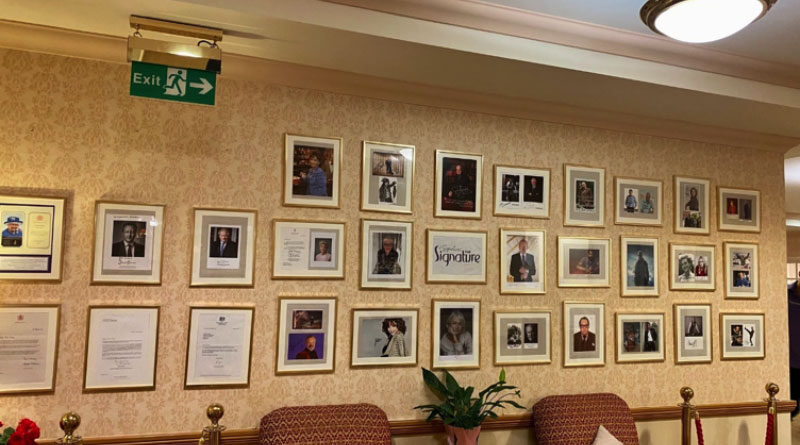 Famous faces from entertainment, sports and politics in the UK and overseas have contributed to a care home’s five-month letter writing campaign to inspire residents and visitors.

Signature at Eastbourne, which provides residential, nursing, dementia and respite care to 80 residents, embarked on ‘A Signature for Signature’, a campaign which has seen the care home write to a host of renowned public figures requesting a signed photo, or letter, acting as their symbol of solidarity and support to the care home.

The activity was designed to ensure the wall was filled with photos and letters ready for September, which marks World Alzheimer’s Awareness Month, in which the home is fundraising for its charity partner, Alzheimer’s Research UK.

Its purpose is to provide residents, their relatives and loved ones an uplifting contribution, and to demonstrate that public figures have taken the time to think of and support them in Signature at Eastbourne’s dementia community.

The result of the ongoing campaign exceeded Signature at Eastbourne’s wildest expectations. Photos were forthcoming from not just one, but two former Prime Ministers, Boris Johnson and David Cameron. The latter providing a supportive letter further showing support.

Comedians such as Graham Norton, Lenny Henry and Vic Reeves pledged their support with signed photos. David Jason, known to millions as Del Boy Trotter in Only Fools and Horses, sent a signed copy of his book, whilst his co-star Sue Holderness, alias Marlene Boyce, is also proudly pictured on the home’s feature wall.

A signature from HRH Princess Alexandra, a cousin of the late Queen Elizabeth II, rounded off a comprehensive response from 35 public figures, and counting.

Sara Connor, Activities and Volunteers Coordinator, at Signature at Eastbourne, who has led the project, says the response from so many famous faces has proved heart-warming.

She said: “To see so many people from the public eye take time out of their schedules to send their photos and best wishes is very gratifying.

“Dementia does not discriminate, and we are all in this together. In fact, many of those who wrote to us will probably have a personal connection to this condition.

“The feature wall is to provide a visual representation and reminder to everybody of the sense of unity there is to help our dementia residents live a life as independent as possible, for as long as possible.

Ian Turnbull, General Manager at Signature at Eastbourne, said:
“This is such a wonderful initiative, led by Sara our Activities Coordinator. Her passion for her work and the residents is incredible and has shown through her determination to make this project work.

“A Signature for Signature is a clever way to show support from faces many people at Signature at Eastbourne will recognise from TV and film and to raise awareness during World Alzheimer’s Month and beyond.”