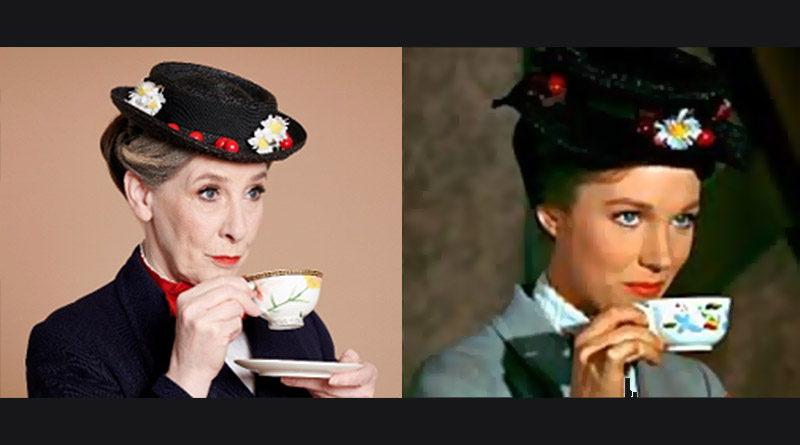 Taking place from 1st – 8th March 2020, Time for a Cuppa encourages friends, families, and colleagues to come together and host a tea party – whilst raising vital funds for Dementia UK, a charity that provides specialist dementia support for families through its Admiral Nurse service.

To raise awareness of this year’s fundraiser, five British celebrities whose families have been affected by dementia – including Downtown Abbey actress, Phyllis Logan, EastEnders actress and Strictly Come Dancing star, Emma Barton, DJ and record producer, Shahid Khan (Naughty Boy), TOWIE starlet, Jess Wright, and her younger sister Natalya Wright – have recreated some of the most tea-rrific moments in movie-history. 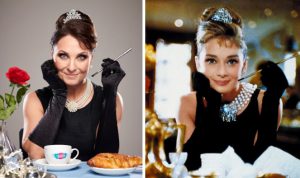 Emma Barton, who posed as singer-songwriter Holly Golightly from Breakfast at Tiffany’s, says: “I’m thrilled to be a part of the ‘Time for a Cuppa’ campaign in memory of my great uncle who died from dementia.

Not only do I get to dress up as my hero, Audrey, but the campaign will help to raise vital funds for Dementia UK and show all affected with dementia how incredible our Admiral Nurses are.

Time for a Cuppa is a fun way to raise money with family, friends and colleagues, so I encourage everyone looking to make a difference to take part. Who doesn’t like to go to a tea party?”

Phyllis Logan, who featured as the magical nanny, Mary Poppins, says: “I’m always eager to promote and support Dementia UK, so I was delighted to feature in their ‘celebri-tea movie moments’ photoshoot as everyone’s favourite nanny, Mary Poppins.

As an Ambassador for the charity, I take part in the ‘Time for a Cuppa’ campaign every year – with a spoonful of sugar in my tea naturally!”

Naughty Boy, who dressed as 1920’s millionaire, Jay Gatsby, says: “I wanted to get involved in Dementia UK’s Time for a Cuppa campaign as soon as I heard about it. My mum is living with dementia, so I’m eager to use my own experience to help people to better understand the condition and how it can be managed.

Dementia is something that could happen in anyone’s family, and I want people to know that there’s a musician out there called Naughty Boy who’s going through the same thing as them. The more people come together to talk about the condition, the more they will be able to help each other.” 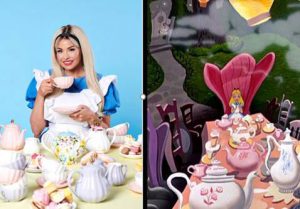 Jess Wright, who was photographed as Alice from Alice in Wonderland, says: “We have a history of dementia in our family, so knowing that there is specialist nursing care out there to support those living with the condition is so reassuring.

‘Time for a Cuppa’ is a brilliant excuse to drink tea and catch up with family, friends and colleagues, whilst raising money for an amazing cause – so I was delighted when Natalya and I were invited to lend our support to this year’s campaign.”

Natalya Wright, who starred alongside her sister at the Queen of Hearts, says: “Jess and I are both big Disney fans, so when we heard that Dementia UK were looking for an Alice and a Queen of Hearts to feature in their Time for a Cuppa campaign, we jumped at the chance to take part.

The charity’s specialist Admiral Nurses can have such a positive impact on people’s lives when they are living with dementia, so we hope that our involvement will help to raise further awareness of the campaign – and encourage people to host a tea party with their family and friends in support!”

Dementia UK is the only charity caring for people with dementia and their families through dementia specialist Admiral Nurses. The charity currently has 282 Admiral Nurses working across various care settings, including out in the community, care homes, hospitals and hospices. It also has an Admiral Nurse Dementia Helpline which is available to anyone with any questions around dementia via phone or email.

Every cake baked, every cuppa made, and every pound raised will allow the charity’s specialist Admiral Nurses to continue working alongside people with dementia and their families: giving the compassionate one-to-one support, expert guidance and practical solutions that can be difficult to find elsewhere.

Dr Hilda Hayo, Chief Admiral Nurse and CEO of Dementia UK, says: “We are incredibly grateful to all our celebrity supporters for helping us to recreate some of our favourite tea scenes from movies; helping to raise awareness of this years’ Time for a Cuppa campaign.

Dementia is an isolating condition which is going to affect more and more people. This is what makes our ‘Time for a Cuppa’ event so special as family, friends and colleagues can come together to talk about people they may have lost to dementia, or even be there for someone who is living with it right now.

However, families need specialist support too. This is what our Admiral Nurses adeptly provide but we urgently need more of them so that we can be there for every family with dementia. We are so grateful to everyone who has made Time for a Cuppa over the years and who are planning to this year.”

Time for a Cuppa runs from 1st to the 8th of March, but you can hold a tea party at any time. Order your fundraising pack at www.dementiauk.org/timeforacuppa today!