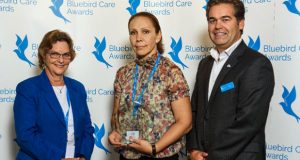 A university educated Lithuanian mother who swapped a desk job for care has been named Carer of the Year at the inaugural Bluebird Care Awards.

Egidija Indrasuite, from Twickenham, who moved to England a decade ago with her husband and twin 11-year-old boys beat thousands to get the top award.

She holds a degree in English and Business and formerly worked as an office administrator at a recruitment firm before deciding to become a care assistant with Bluebird Care six years ago.

At a special afternoon tea hosted at Fortnum and Mason in London yesterday, she was chosen by a panel of independent judges from six regional winners picked from thousands of care assistants at more than 180 Bluebird Care franchises across the UK.

Judges noted her humility in the job, observation and strong relationships she holds with her customers.

Her background in IT has also helped her implement a cutting edge technology called PASSsystem which allows care assistants to share information instantly with managers, customers and their families through an app.

Mr Brindle said: “Egidija is intelligent, well-educated and skilled. She could have chosen any number of career paths but made a positive choice to come into care which she is passionate about. She is warm, insightful and uses her own family experience to deliver the best care.”

Bluebird Care Carer of the Year, Egidija Indrasuite, said: “It is a great honour to have received this award. I do not do my job thinking of awards but it is such a pleasure to receive this recognition.”

The Bluebird Care Awards winners were recognised for the outstanding, and often extraordinary, contribution that they have made over the past year in improving the lives of Bluebird Care customers.

The national winners were chosen from 18 regional finalists who had been picked at an earlier stage from the 15,000 Bluebird Care staff across the UK.

Judge Bridget Warr said: “It was a great privilege to be asked to judge these awards, and extremely difficult to select only one winner. Being able to hear the positive stories in which care assistants influence people’s lives on a day-to-day basis was a great honour, and there was genuinely no weak link in any of the finalist categories.”